What is it with kyopo men in positions of authority in Orange County?

Fresh on the heels of the arrest of music teacher Daniel Hansol Oh last February for molesting at least three very minor girls in Orange County, comes news that a church group leader in Cypress (western Orange County) from Fullerton (northern Orange County) has been arrested for giving a fifteen-year-old girl marijuana and having sex with her in the church parking lot.

Twenty-one-year-old Timothy Han supposedly did all this in June 2008 at Miracle Land Baptist Church, a Korean-American-oriented church in western OC. He is being charged with two felony sex charges and one misdemeanor count of contributing to the delinquency of a minor, which brings with it a maximum of three years and eight months in state prison.

Cypress Chief of Police Gerard Rudiger is quoted as saying, "I've been reading at KoreaBeat how English teachers have been harassed by the authorities in Korea over every little thing, so I thought it was time for some payback."

No, not really; I'm making that last part up. But I thought that was a better way to end this post than to give examples of some of the naughty things I may or may not have done in church parking lots, though it was always with people no less legal than I was, and it never involved drugs of any kind. 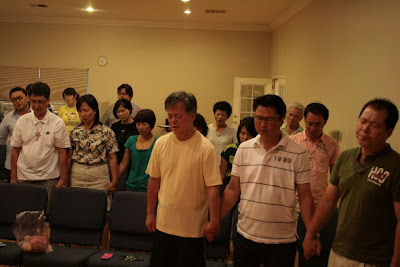 [above: "하나님, we pray that it was only that one girl that Brother Timothy tried to lure down the path of iniquity* and turpitude**. Oh, and if it pleases you, strike him with ice cream headaches every day he's in prison, and maybe a big, sweaty cell mate named Bobby Ray."]