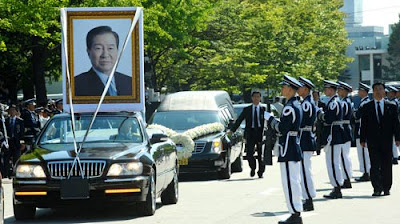 The Los Angeles Times has an article by Seoul correspondent John Glionna on the funeral of Kim Daejung. Despite the headline, it actually doesn't deal much with the funeral itself until the latter portion, instead highlighting South Korea's conservative President Lee Myungbak meeting with a delegation from North Korea:

As tens of thousands gathered here today to mourn the death of ex-President Kim Dae-jung, who was awarded the Nobel Peace Prize for his bid to reconcile with North Korea, Seoul's conservative government took a page from Kim's diplomatic playbook — meeting face-to-face with its communist counterparts.

In a rare half-hour sit down — his first since taking office last year — South Korean President Lee Myung-bak discussed growing tensions on the Korean Peninsula with a high-level delegation from Pyongyang on hand to pay respects to the late Kim, who died Tuesday at age 85 after a long bout with pneumonia.

Shortly before the state ceremony at the National Assembly on a humid afternoon, the North Korean delegation appeared at the Blue House with an undisclosed verbal message from leader Kim Jong-il, said Blue House spokesman Lee Dong-kwan.

Posing for photos with North Korean envoy Kim Ki-nam, a close aide to Kim Jong-il, Lee said "there is nothing that cannot be solved if South and North sort out their problems through communication and sincerity," according to the spokesman.

Through sincerity? The North Korean envoy might be right, but we won't know until they actually try that, will we?

Anyway, while I do enjoy the interesting focus that LAT's new replacement for Barbara Demick has been bringing us, I also think he sometimes brings a bit of a facile analysis to the complex topics he discusses. Even in this article, he perpetuates the popular misconception that President Kim Daejung won the Nobel Peace Prize primarily for meeting with Kim Jong-il, when he won it as much "for his work for democracy and human rights in South Korea and in East Asia in general," and might have won it just on that even without the 2000 summit with KJI. 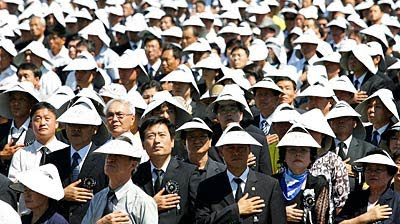