I sorta feel bad for the Gubernator, he being blamed California's intractable financial crisis in all. But then I remember that he led the recall to oust then-Governor Gray Davis, complaining that the Golden State's aptly named chief executive didn't know how to manage California's budget.
Well, it looks like Arnie is learning what many have been saying for years: California is ungovernable, at least as state laws are now. Of course, the beholden-to-no-one centrist Republican did try to reform the state's rules (with some good ideas), so it's really not his fault.
And this has means his popularity is circling the toilet bowl. His approval ratings are hovering at around 28 percent, coincidentally the same percent of Californians that have no newspaper subscriptions and no caller-ID service.
But if the Gubernator's earlier career is any indication, when things look the bleakest for our telegenic hero, you know he's going to pull through in the end. Don't be surprised if you read of a massive shootout and several explosions in the State Assembly. And State Senate, watch your back. Just sayin', is all.
A sweaty and cut-up governor, the sleeves ripped off his tailor-made suit to reveal still pumped arms, will be standing over the rubble that was once the capitol dome and the guts and bones that were once several prominent political leaders, stroking an automatic weapon and smoking a cigar, deadpanning, "Dis is veto pawar." 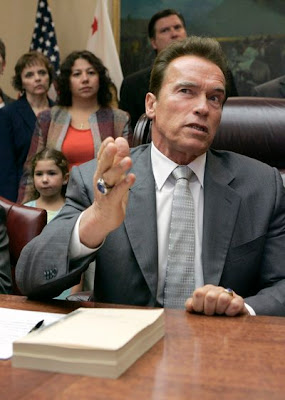 [above: The governor tells Senate Minority Leader Sam Blakeslee: "I like you, Sammy. That's why I'm going to kill you last."]
on August 01, 2009