Clinton arrives in Pyongyang, threatens to kick KJI's ass, then makes a run for ex-Air Force One with Ling and Lee in tow 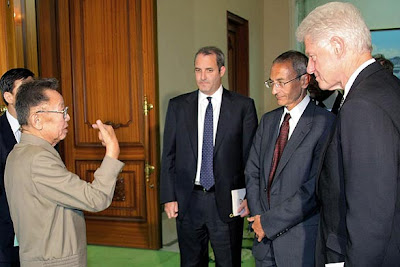 At least, that's what I imagine from the picture above, where Kim Jong-il took one look at former President Bill Clinton and suddenly had a flashback to the Lord of the Rings movies where Gandalf the Wizard meets up with the Hobbits. And yes, in case you're not entirely clear on this image, that makes the Diminutive Leader a Hobbit, whether he has hairy oversized feet or not (hairy oversized palms are a possibility).
And that's when KJI nearly pooped his pants, shoved Laura Ling and Euna Lee in the direction of Clinton's entourage, and said, "Okay, you take 'em! I don't want any trouble." In hindsight, it was probably a better move to send Clinton instead of Bill Richardson, who is himself a sizable figure, but less so vertically and more horizontally. 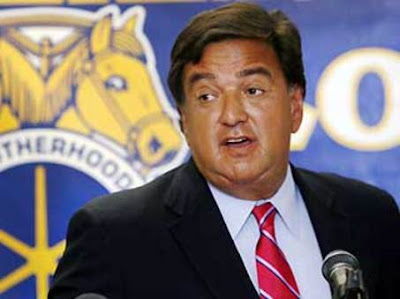 I met Bill Clinton once, and he's a towering figure. I seriously thought he was standing on top of a couple phone books behind the desk he was at. Nevertheless, his physical stature alone is probably not what got The Wonder-what-they-were-doing Twins released.
Though, in all honesty, it could have been his political stature. I do think it is a high possibility — maybe even still a likelihood — that some concessions were made to Pyongyang in order to secure the pardon and subsequent release of these two who may have foolishly decided to see if they could cross the river and enter North Korea, thus putting not only their own safety at risk, but putting the very lives of North Koreans who cross the border at that point in very grave danger (and this is where I repeat my "fu¢k 'em" comment).
We'll have to see later if the Obama administration backs off on any of the softish hardline stance they've been taking, but in the meantime, I submit the possibility that Clinton had to promise nothing in order to free Lee and Ling.
Back in late 2000, in the final month or so of his presidency, there was considerable talk of then-President Clinton making a historic visit to North Korea to meet face to face with Kim Jong-il. Because of a chance for a Mideast peace deal, he didn't go. What that visit would have offered for KJI, even if nothing else came of it, would be a sense of global prominence to sell to his people, and perhaps a hint of legitimacy to the global audience.
And since Clinton didn't come, it has probably been eating at KJI ever since. So this visit is sort of the next best thing (next best because Clinton is actually no longer president). If Clinton went to North Korea and, say, apologized in person for these two waywards crossing illegally into DPRK territory, that would be a major coup for the Dear Leader. It's showing his own people that other countries, including the most powerful nation on earth and North Korea's greatest threat, fear and respect the Dear Leader (and all of North Korea by extension). It's also forcing the US — again, that dreaded enemy — to lose face by being made to apologize.
The news story itself hints at such a thing:

"President Clinton has safely left North Korea with Laura Ling and Euna Lee," Matt McKenna said in a statement. "They are en route to Los Angeles where Laura and Euna will be reunited with their families."

News agencies quoted the North's state media saying the journalists were granted a "special pardon" after Clinton negotiated their release with officials in Pyongyang during a surprise visit.

Laura Ling and Euna Lee had been sentenced to 12 years in prison for illegally entering the secretive nation this year.

North Korean state media reported that Clinton "expressed thanks [for the pardon] and delivered an oral message from Barack Obama on improving relations between the two countries," according to South Korea's Yonhap news agency. The North Korean account said Clinton had "delivered a sincere request from the U.S. government for a pardon and return [of the two journalists] from a humanitarian aspect."

And it said Clinton had "expressed a deep apology that the [two female reporters] entered the country illegally and committed hostile acts against the republic."

The North Korean media said issues had been discussed in a "serious atmosphere but also frankly and in depth," from which the two sides "agreed to resolve problems through dialogue."

(The last paragraph holds out the possibility that the Obama administration may have made lemonade out of the situation by having Clinton lay out what they want North Korea to do. Maybe an enticement for diplomatic relations if North Korea verifiably does this or that. Because of the diplomatic legitimacy and the funds that would be available because of that, it's something KJI desperately wants.)
So in the end maybe Lee and Ling have been freed on the cheap, both in terms of political and actual capital. That still doesn't mean you should buy their inevitable book when they publish it (probably in Borders and Barnes & Noble by Christmas), because their attempt to enhance their own careers with a journalistic coup (videotaping themselves clandestinely crossing the border just like refugees would) has put innocent North Koreans at risk and may indeed have cost some their lives.
If you still feel these "brave" two must be honored, I think their surnames would make suitable monikers for a pair of pandas. 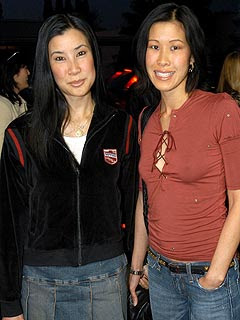 [above: Laura Ling (right) and famous overshadowing celebrity older sister Lisa Ling (left)]
UPDATE:
Joshua at One Free Korea appears to have come around to my sentiments.
on August 05, 2009