On the homefront with Euna

UPDATE:
The Los Angeles Times has reports on the same letter below. I'm beginning to formulate an opinion that the foolish decisions that led to Laura Ling and Euna Lee's arrest — including the mind-bogglingly stupogant idea to illegally enter North Korea — were more the work of Ling and Mitch Koss and less (if at all) of Euna Lee.
ORIGINAL POST:
While Laura Ling is out making book deals, Euna Lee is at home making scrambled eggs. This link goes to a heartfelt letter she posted to one of the sites that was supporting her.
And then there was this:

As soon as I got home, after I gave a long hug to my family, I wanted to thank the people who helped me. I wanted to let people know how grateful I was and am. I found myself surfing the Internet and reading different blogs and news articles about us. Then I realized that I felt separated again from my husband and daughter, just as I was for 141 days in North Korea.

I decided then not to go through all the emails and articles just yet. I have not checked the Facebook pages about Laura and I or the web site, LauraAndEuna.com. Because I know that once I started to read them I would get caught up in all the love and support everybody gave me and I will neglect my family.

Yeah, you might want to give my blog a pass. Really, it's not that I'm not happy you're back from North Korea, it's just that I wish you hadn't gone in the first place.
When I get a little more time, maybe I'll write an open letter of contrition and penance for Euna to peruse. I have a feeling that she, but maybe not her comrade, would actually take it seriously. 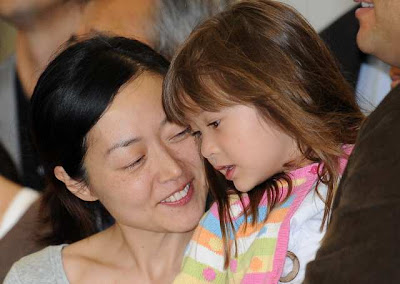 [above: North Korean refugees hiding in China who were interviewed by Laura Ling et al on videotape brought by these reporters into North Korea also have families.]
on August 12, 2009