First the "Cash for Clunkers" was supposedly going to be put on hold because it proved so popular in early weeks that they feared running out of money (and the possibility of fraud). Then they decided that because it was so popular, they'd up the money for it to by adding $2 billion.
And this is good news for Hyundai, which had shrewdly decided to get a jump on the program by allowing potential new buyers the chance to make purchases based on the likelihood of them being able to get the $3500 or $4500 lower-gas-mileage trade-in incentive a week or so ahead of the general launch.
The Hyundai Elantra, the South Korean automakers signature economy car, was listed as the sixth most popular new car purchased through the program. The top car was the Toyota model in the same class, the Corolla, followed by the Ford Focus and the Honda Civic, also in the same class. (Actually, the program has been good for many carmakers, as it provided a huge boost in sales in July.) 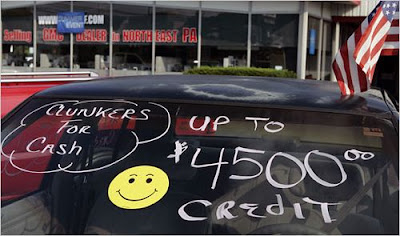 [above: You had me at "Hello, here's $4500!"]
Generally the top ten is smaller, economic vehicles which would get higher mileage and pollute less (which is one major reason for the program). Toyota had three in the top ten (Corolla, Prius, and Camry), Honda had two (Civic and Fit, but not Prius competitor Insight), Ford had two (Focus and Escape), Hyundai had one (Elantra), Dodge had one (Caliber), and Chevrolet had one (Cobalt).
This does not bode well for General Motors, which barely made the list. In fact, some have complained that foreign automakers are benefiting more than American automakers (even though some of the "foreign" cars are manufactured in the US). That statement throws me into a mild state of cognitive dissonance, however, since one thing the K-blog commentariat has taught me is that it's the South Koreans who are xenophobic and anti-free trade, while it's the Americans who are so open to all products regardless of their country of origin. Maybe the "Korean Wave" has hit Congress and Detroit.
For the record, seven of the top ten are made in North America (let's pretend Canada's not a foreign country, since they mostly speak English up there and they watch our TV programs), with only the Korean-manufactured Hyundai Elantra and the Japanese-manufactured Honda Fit and Toyota Prius being shipped across the sea.
on August 06, 2009