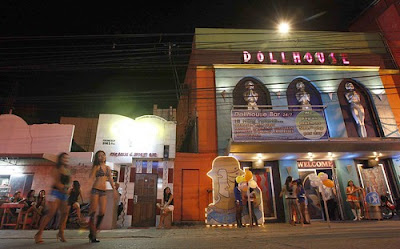 John Glionna, lately the Seoul correspondent for the Los Angeles Times, headed down to Angeles City, the former US military camp town where the local prostitution industry has adjusted to the loss of the Clark Air Base cash cow by becoming a haven for older men on sex tours who want English speakers:

The U.S. base closed in 1992, and the often-randy airmen have gone with it. But the girls, the sex, the round-the-clock raunchiness remain. Only the customers have changed.

A thriving sex tourism trade attracts foreign customers by the thousands in search of something they cannot find back home: girls young enough to be their granddaughters selling sex for the price of a burger and fries.

Once populated by men in their early 20s who started each day with 100 push-ups, the place is now home to older men who need help pushing themselves out of bed in the morning.

Most are bused up from Manila, an hour away, on golf and sex package deals. This is no quasi-innocent boys' night out. Rather, it's a single-minded realm of weary-looking loners on a resolute hunt that smacks of feeding an addiction.

Many are ex-military men reliving former glories, Peter Fonda and Dennis Hopper wannabes, some gathering at the local American Legion post before embarking into the night.

As one might expect if one reads Korean news at all, there is a slight Korean angle to this story, even if it is a bit buried:

All along Fields Avenue, the come-on banners with their Web addresses advertise good pay (up to $10 a day) for hostess jobs. But applicants must speak Korean, Japanese or Chinese.

That's right, the Korean ajŏshi has also become something of an icon of the same sex tourism that was so heavily derided when it was Japanese salarymen visiting Korea. Along, of course, with Japanese and Chinese men, even if there are also a lot of White men from North America and Europe alongside them.
From his descriptions of the customers he sees, it seems Mr Glionna wishes to convey just how pathetic these men are. The header itself says the US military men "have been replaced by lonely old men," another would-be customer is "a saggy-faced Australian," and there is this first paragraph:

At a club called Koko Yoko, balding men with bulging bellies sit at an outdoor bar, sipping beers and leering at the young girls who pass on the model's runway gone wrong called Fields Avenue.

Okay, okay. We get it. Men who buy sex are pathetic... and probably fat, ugly, wrinkly, and smelly. And bald. Because no one likes bald men.
Over-thirty Kushibo is a decent-looking chap with a full head of hair (and descendant of other people with a full head of hair; my septuagenarian father's hair is so thick, people think he's wearing a wig), and a slim build thanks to a devotion to reasonably healthy eating and regular exercise.
But what if I were someone with less-than-appealing looks, some old(er) guy who's genetically cursed with the bad luck of having one's hair grown on the wrong parts of the body, at least by modern-day standards of attraction? Males with a shiny head and a hirsute back still have a libido, and wouldn't it be torture to deny them some lovin'?
I mean, I'm not so sure that prostitution is the answer, but I'd rather not mock them for being horny. Well, they are being horny and seeking to pay for sex, an act that inherently objectifies women. And maybe some of the customers there are freaks, but if that's the angle, then play that out. I guess it's the gratuitous denigration of these poor chaps' appearance that kind of bothers me. Like the less-than-pretty are less human. That kinda sh¡t has got to go.
And that leads me to another thing, the whole concept of prostitution's moral place in general. I'm like at least a few people in that I don't think prostitution can be legislated and enforced out of existence, and I might be like an even smaller group in that I am apprehensive about the consequences of drying up the sexual outlet for the most desperate (i.e., those who are least appealing, not those with the freakiest or most perverse proclivities).
But on the other hand there is deep concern about the exploitation of those who work in the sex industry. No one should ever be there involuntarily, but at the same time — and this is where feminist relatives of mine might decide to hit me in the back of the head with a large book — we should acknowledge that some (many?) are willing participants in a business that they can move in and out of as they wish. In Korea and Japan, where utilitarian views on sex are common, it's easy to see a model of sex-for-money where the young women are not particularly coerced.
Sure, the work may be the equivalent of a dead-end job that they will regret later on, but I think we do more to protect them (and future would-be sellers of sex) if prostitution is legalized and carefully regulated. Requiring practices that promote safe sex (and in Korea, condom usage, as I understand it, is de rigueur), ensure the participants' safety, and prevent the exploitation of newcomers, etc., etc., would be a better way to go to protect the people involved.
That makes me an idealist or a cynic. Or both.
John Glionna's own report gets into the prospect of exploitation (or not) and why the women come to Angeles City:

A young dancer in tight red hip-hugger pants and matching sports bra acknowledges that Fields Avenue may not be pretty, but the money is good. She rolls her eyes at two overweight men who pass by looking like large reptiles dressed in children's clothing.

Sure, the sex is disgusting, she says. But at least it's over quickly.

Sex with old people is disgusting? I guess she's not a fan of To Die For. Nor, for that matter, is Mr Glionna, who had better keep eating his oatmeal and taking his zinc supplements, because Karma is looking for him.
on August 16, 2009