This is a rarity, but it comes not from a shift rightward among Aloha State voters in President Obama's hometown, but from the two Democratic contenders in the contest to replace Congressman Neil Abercrombie in urban Oahu's District 1, neither of whom was able to set aside their own ambitions to field a unified party candidate. I guess that's what primaries are for, and there wasn't one. 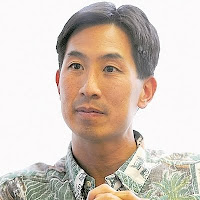 It was a mail-only ballot. Mr Charles Djou won a whopping 39.4 percent against the 58.4 percent combined total of his two Democratic opponents. Nevertheless, the GOP painted this Korea-like plurality victory as a positive indicator for the Republican Revolution. To be fair to that characterization, though, he is the first GOPer in two decades to represent Hawaii in the nation's capital.

Mr Abercrombie stepped down so he can run for governor in November. He hopes to replace GOP Governor Linda Lingle (who would be a Blue Dog Democrat in most any other state), who has completed her two terms.

Mr Djou will hold onto the District 1 seat at least until January 5, but if he wants to stick around longer, he will have to win again in November, when the seat would normally have been up for re-election anyway. His Democratic opponents this time, Ms Colleen Hanabusa and Mr Ed Case, likely won't repeat the same problem all over again in November because there will be a party primary in September.

I did not vote in the election even though I live in District 1, which covers the "city" part of Oahu (District 2 is the more rural and suburban part of Oahu, plus all the other islands). I can make a case for voter registration in Orange County or Honolulu, but I'm interested in the Golden State's upcoming vote on marijuana legalization, so I've held onto my voter registration back in California for now.

I did meet Mr Djou once, and he was kind of a condescending jerk (but hey, I can relate). He is a major opponent of Honolulu's efforts to get a railway system in this linear-arranged city, while I've been part of groups trying to assure that the now-approved rail system starts with the university district (where the University of Hawaii and Chaminade University are) in order to serve those in greatest need and to guarantee the expensive project has high ridership from the get-go (à la Salt Lake City). He's from a ritzy neighborhood that doesn't concern itself with the needs of the economically beleaguered middle class or students, so why should he support the greater good? Maybe I can join LiNK and get the new Congressman to push for some stronger positions against Pyongyang.

Email ThisBlogThis!Share to TwitterShare to FacebookShare to Pinterest
Labels: Hawaii