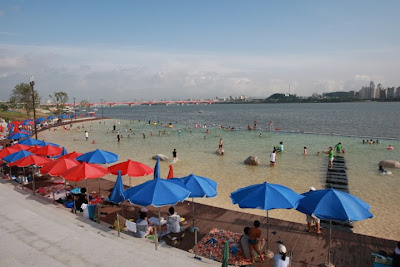 I haven't checked it out in person, but the pictures of the 난지 물놀이장 (rough translation: Nanji water playground) that I randomly found while searching for something else look like fun.

In the shadow of the World Cup Stadium along the Han River in western seoul, the massive land fill on the former Nanjido Island, which became a Nanjisan Hill (a ziggurat, really), is now just called "Nanji" and it's becoming a neat little place to visit.

Nanjido's impending "filled-up" status prompted the government to impose Seoul's strict recycling policies, including the system of pay-to-toss garbage bags for non-recyclables. (Nanjido is also the name of my dog, whom I had to give up when I moved from my quaint old Japanese colonial-era house to the apartment I bought when I was booted out by the house owner's money-obsessed daughter who wanted to sell it. I miss my dog, and the house.)

Email ThisBlogThis!Share to TwitterShare to FacebookShare to Pinterest
Labels: Nanjido