Ultrasound and abortion:
America and Korea and their opposite cases

Exhibit #437 that the US and South Korea are (often) each other's Bizarro World. In the New York Times today we have an article on how ultrasound is being used in a weapon in the battle for abortion:


The technician told Laura she was at 11 weeks. “Do you want to see your ultrasound?” she asked. “I’d rather not,” Laura answered promptly.

Laura, who asked that her last name not be used, had come to the New Woman All Women Health Care clinic in Birmingham with her mind set on having an abortion. And she felt that seeing the image of her bean-size fetus would only unleash her already hormonal emotions, without changing her mind.

“It just would have added to the pain of what is already a difficult decision,” she said later.

Over the last decade, ultrasound has quietly become a new front in the grinding state-by-state battle over abortion. With backing from anti-abortion groups, which argue that sonograms can help persuade women to preserve pregnancies, 20 states have enacted laws that encourage or require the use of ultrasound.

Alabama is one of three states, along with Louisiana and Mississippi, that require abortion providers to conduct an ultrasound and offer women a chance to peer inside the womb.

Late last month, Oklahoma went a step further. Overriding a veto by Gov. Brad Henry, a Democrat, the Republican-controlled Legislature enacted a law mandating that women be presented with an ultrasound image and with a detailed oral description of the embryo or fetus.

Contrast that with South Korea, where abuse of the ultrasound procedure and other sex-determining technologies were seen as causing a higher abortion rate (and in a country where such rampant pregnancy termination is nominally illegal, allowing it to be used as a key tool in reducing the fertility rate). Abortions were  not uncommon when would-be parents who learn of their fetus's sex might be more apt to abort the pregnancy if it's not the sex they wanted. This was usually son-preferring families aborting female fetuses, which led to a disproportionate gender ratio. 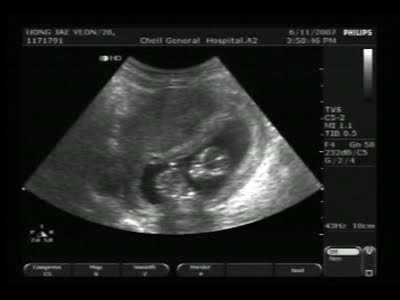 Of course, ultrasounds are an important part of maintaining the health of the mother and the fetus, so the solution was to outlaw the reporting of the fetus's sex to the prospective parents (and for the life of me, I'm having trouble finding a link... even if I include "Korea" in the search parameters, I end up with stories about China or India). [Edit: Oh, here's one from the WHO!]

Like many laws on the books in Korea, however, the enforcement of this legislation was lax. Doctors and parents got around it by thinly veiled statements intended to reveal the information indirectly: "Oh, looks like you're going to be decorating your baby room in blue," "Ah, your kid will make a fine soccer player some day," or even, "I think your in-laws will be very pleased." Silence from the doctor was also a form of code.

Of course, growing opportunities for women, as well as their expanding value in a society where marriage-age females are scarcer and scarcer, have meant that there are fewer and fewer families who would abort a child simply over its sex, but they're still out there. Such sex-determinant abortions may in fact have been only a small portion of overall pregnancies and even overall abortions, but they were enough to cause a gender imbalance that South Korean society will be paying for for sometime.