Reuters on North Korea's man of mystery (the soccer coach, not the Dear Leader) 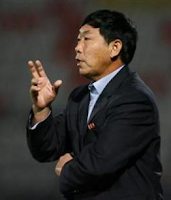 That would be Kim Jong-hun instead of Kim Jong-il.


Like the rest of North Korea's international men of mystery, very little is known about coach Kim Jong-hun.

A former defender for the national team, Kim's star was on the rise when he took charge of the men's soccer team of the elite April 25 Sports Group, the athletic wing of the North Korean People's Army.

Picked to lead the national squad in 2007, Kim has relied on defensive discipline and team spirit to steer the workmanlike North Koreans to their first World Cup finals since 1966.

High-profile coaches Philippe Troussier and Sven-Goran Eriksson were rumored to be in the frame to replace him for the finals in South Africa, but Kim has clung to the job and will lead the North's campaign in Group G alongside Brazil, Portugal and Ivory Coast.

Owing to the mysteriousness of the subject, it's a short read.