Yeah, Marmot probably wouldn't be happy about this kind of thing 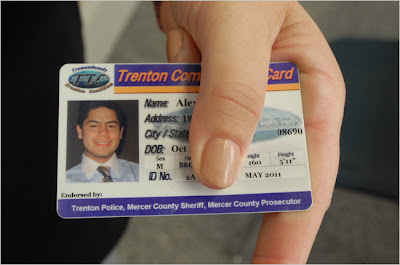 While Arizona is making everyone in the state carry documents showing they're in the country legally, Trenton, New Jersey, the capital of the Garden State (I say that without any irony; I've never visited, so I have no reason to dis) is going in the other direction.


Since moving to this city from her native Guatemala a decade ago, Herlinda, an illegal immigrant, has supported her family with restaurant work, but has had no way of proving that she lives here. Without government-issued photo identification, like a driver’s license or a passport, she said, she could not get treatment at most medical clinics, borrow a book from the library, pick up a package from a mail center or cash a check.

But this month she discovered a solution: a community identification card issued by a coalition of civic groups and endorsed by Trenton and Mercer County officials.

“When you don’t have a proper ID, they can humiliate you,” said Herlinda, 43, as she waited in the offices of a church where the cards were being issued. “I feel I belong in Trenton.”

As a new law in Arizona makes the failure to carry immigration documents a crime and spurs similar proposals in other states, Trenton is one of a small but growing number of municipalities that have moved in the opposite direction — making sure that illegal immigrants have documents to make their lives easier.

At least six city governments, including San Francisco and New Haven, now endorse or issue photo identification cards to residents. The latest is Princeton, N.J., where advocates for immigrants, with the consent of both the borough and the township, will begin issuing cards on May 22; other New Jersey communities have also expressed interest. Oakland, Calif., has approved a program but has not yet started issuing cards.

The issue is not new (driver licenses for undocumented residents emerged as a campaign issue in the latter part of this just past decade), and many people protest that "making life easier" is the exact opposite of what we should be doing for illegal immigrants.

From a law-and-order point-of-view, I get that (even though I think laws and policies to stop illegal immigration should first be vigorously enforced in the workplace, which goes to the heart of why almost all undocumented workers come to the US, it's easy to understand the concerns that making life easier elsewhere only undermines the efforts of law enforcement and the government — as meek as they typically seem to be — to put a dent in the overwhelming number of people who residing in the United States illegally).

From a public health and welfare stance, however, the opposite is true. Like it or not, millions of people are in the US illegally, and it becomes a health and safety hazard for all if they cannot get (or feel they cannot access) health care, insurance, or education. Communicable diseases have no regard for legal status or passport, so it's certainly not in our best interest to prevent illegals from getting adequate healthcare (and Obamacare goes so far as to bar undocumented residents from buying health insurance on exchanges, even with their own money). Likewise, having people on the road who cannot legally obtain car insurance, or children of illegal immigrants growing up within our borders without an education, is also fraught with trouble waiting to happen.

You see, you don't want to keep people away from activities that enhance social welfare: punishing them punishes us and only exacerbates the problems associated with illegal immigration. So from that perspective, these community IDs make sense (and laws like Arizona's that potentially require everyone to show their papers anytime the police walk by are problematic).

But more importantly, it underscores why workplace regulations should be Ground Zero for efforts to reduce their number: If there's one place we should be scaring undocumented residents away from, it's the workplace.