You can watch BBC video about it, or you can read the article here: China has decided to remain neutral between its belligerent client state (i.e., North Korea) and the major trading partner of China whom that client attacked (i.e., South Korea). More:


China has held back from censuring North Korea at a summit in South Korea dominated by the issue of a sunken warship.

South Korea has accused North Korea of torpedoing the Cheonan, which sank on 26 March with the loss of 46 lives.

Chinese Premier Wen Jiabao said the priority was to reduce tensions and avoid a clash over the incident.

But he did not mention North Korea by name or show support for possible UN sanctions against Pyongyang.

Surprising to almost no one, really. And it bears repeating: Barring an implosion of the Pyongyang regime caused by the people in the DPRK themselves, nothing can be done about North Korea as long as the Chinese are propping them up. (And sadly, it Beijing ever really did try to come down hard on him, Dear Leader Kim Jong-il can always turn to Russia — who said the Cold War was over?) 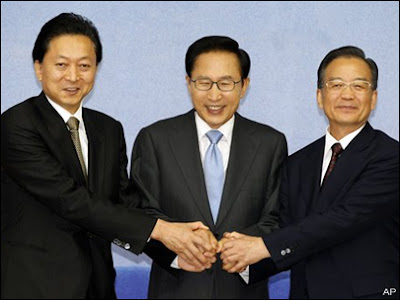 [above: Images like this do not scare Kim Jong-il. Especially when they stand in order of height like they're in kindergarten.]