Is Oh Eunsun a victim of Dr Hwang and Korea's reverse halo effect? 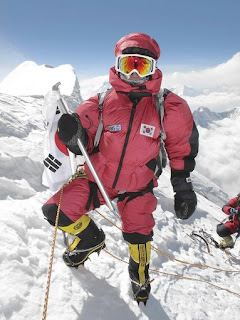 It's nearly half a decade in the past, but I guess the Hwang Factor™ is still around: major accomplishments by Koreans are sometimes still regarded with a just-below-the-surface suspicion that there may be shortcuts or subterfuge involved.

This apparently is tainting what should be a celebrated accomplishment by Oh Eunsun, the South Korean who became the first woman to scale all fourteen of the world's peaks over 8000 meters.


In late April, the 44-year-old former government worker became the first woman to scale the planet's 14 highest peaks — all of them over 26,000 feet and located in the Himalayan and Karakoram mountain ranges — narrowly beating three European women for the record.

Though hailed as a hero in South Korea, Oh says she has learned a bitter lesson about her endurance sport: Along with capricious storms and thin air, jealousy and resentment often await at the highest Himalayan altitudes.

Oh's record has provoked an avalanche of criticism. Her use of oxygen tanks and her reliance on Sherpa guides break unwritten rules of the sport, some say. Others dispute that Oh even reached the peak of Kanchenjunga on the border between India and Nepal, the world's third-highest summit, suggesting her victory photograph was taken somewhere below the top.

Oh, they say, is a cheater.

This is not a new story (I myself mentioned it several times), but the LAT's John Glionna addressed it a few days ago (with little play in the K-blogs), and he also drew that connection with Hwang Woosuk:


The controversy, many say, raises questions about fair play on both sides. Are Europeans so protective of their traditional success in alpine sports that they would attack an unlikely champion from Asia? Or is Oh the product of a hyper-competitive South Korean culture marked by such scandals as cheating on college entrance exams and the 2006 case of scientist Hwang Woo-suk, who faked groundbreaking stem cell research?

"It's heartbreaking," Oh says of criticism from some female climbers whose exploits inspired her. "But I'm also human. How could I not be angry?"

It sucks to be tagged in a negative way because of your compatriots. Sadly, it's something many of Ms Oh's fellow Koreans routinely do with people of other nationalities.

But at the same time, do these handful of prominent cases warrant such a broad-stroke impression? Cheating on college entrance exams is not unique to Korea, nor is academic dishonesty. Korea sometimes seems to be coated with whatever the opposite of Teflon would be. I wonder, for example, how much worse the fallout would be for Korea Inc in general if Toyota were a Korean company. One could easily argue that the rest of Japan Inc is insulated from Toyota's woes in a way Korean companies wouldn't be were the same problem to befall Hyundai or Kia.

UPDATE (June 2, 2010):
Inspired by a comment at this post at ROK Drop, I'm adding a little something in response to allegations that Ms Oh broke "unwritten rules" against using a sherpa or an oxygen tank, an elaboration of one of my own comments.

Yes, those apparently were "unwritten rules of the sport." And unwritten rules have a funny way of being brought to the light of day when it's most convenient, like for an opponent trying to discredit your victory. I note that this protest comes after the accusations that she was just shy of one of the summits apparently didn't stick.

The sherpa guide "unwritten rule" rings hollow to me, given that the first two people credited with reaching the top of Mt Everest were Sir Edmund Hillary and his sherpa guide Tenzin Norgay [see here]. That same link notes that "every climber carries an oxygen tank because of the lack of oxygen."

Unless the sherpa carried her and her oxygen tank up the frickin' mountain, gimme a break. Ultimately, as the LAT article points out, some Europeans apparently aren't ready for Asian alpinists to make a mark in "their" sport.