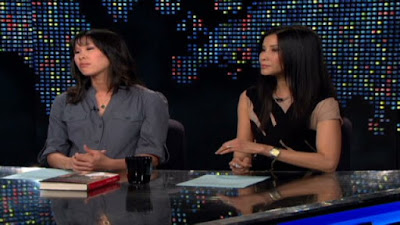 They thank former President Bill Clinton for securing the release of Laura Ling and her colleague Euna Lee, by having offered "a message of condolences" that I found a bit suprising:


"There was no deal," Ling said of their release in August 2009. "What President Clinton said on the plane ride home was that Kim Jong Il told him, 'You were the first person who reached out to me when my father ... died, even before my allies. I've always remembered that and I've always respected you for that and I've always wanted to meet you.'"

Because of the book release, Laura and Lisa are, naturally, all over the media. Laura also penned an opinion piece for CNN:


We were the first Americans tried in North Korea's highest court. Our sentence, two years for trespassing and 10 for "hostile" acts, shows where the North Korean government's real concerns lie. Leery about a negative portrayal of its regime, the North Korean authorities decided the documentary we were making would threaten their government. It was seen as a hostile act meant to weaken or bring down the country.

She also talks about the attitudes of North Korean refugees, using it as a window into the psyche of DPRK citizens. She also talked about what she had to say in order to get released:


In June, I stood before a North Korean judge and expressed my hope that the United States and North Korea might one day establish closer relations. That desire still exists.

I also promised that if released, I would never report on the issue of defectors or North Korean human rights abuses again. That is an oath I cannot keep as long as the people of North Korea remain silenced.

I'll come out and say that the contrition-in-exchange-for-leniency concept seems alive and well in both Koreas. That should make reunification at least a skosh easier.

Anyway, it appears there are new revelations coming out that are making these media appearances interesting, to say the least.