No Daily Kor today either, but I leave you with this...

Halliburton, not content to merely jack up our economy with their money pit of a war in Iraq, has now set their sights on the ecology: Is Halliburton responsible for the shoddy work that caused the massive oil spill off the coast of Louisiana that may prove to be an even worse disaster than the Exxon-Valdez spill of 1989?

But wait! No need to worry that corporate mishandling by a shadow government has brought us to this woeful state, because there is evidence and speculation (mostly speculation) that the entire problem was caused by ... wait for it ... the North Koreans! Yep:


While some say environmental extremists, who have committed acts of terror in the past are responsible, the dominant theory that has emerged is that a North Korean sub torpedoed the rig. The Deepwater Horizon oil platform was owned by Transocean, the largest offshore drilling contractor in the world. It was also built and financed by South Korea’s Hyundai Heavy Industries Co. Ltd., which leads many to think about a North Korean attack.

North Korea has been increasingly aggressive since announcing it has developed nuclear weapons last May. It has waged a heavy cyberwar against the United States, arrested and later released two American journalist it accused of espionage, and has been caught shipping military cargo to rogue African nations. North Korea has also become the clear suspect in the March sinking of a South Korean battleship.

For the record, yours truly did note the South Korean connection to the BP rig ten days ago (it's the very bottom story), but I never made the North Korea connection because, well, I can tell the two Koreas apart.

UPDATE:
Joshua at One Free Korea has picked up on more conspiracy theorists espousing this idea. 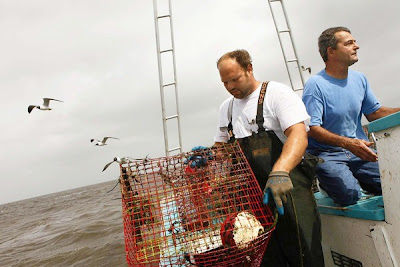 [above: Louisiana fishermen Lance Melerine and David Hebert are distraught and perplexed as they ponder whether to blame their plight on Dick Cheney or Kim Jong-il.]

Email ThisBlogThis!Share to TwitterShare to FacebookShare to Pinterest
Labels: Korea news links, Kushibo has a life outside this blog