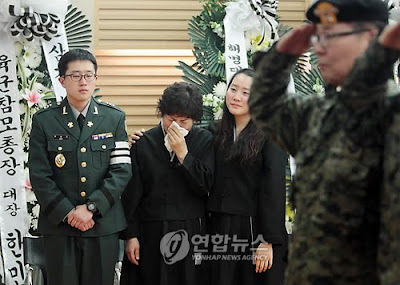 On the surface of things, it might seem as if Seoul were some enervated entity, unable or even unwilling to stand up to a murderous neighbor that has committed a brazen act of war. At One Free Korea, one commenter suggests that "if someone made an unprovoked attack on an american target like pearl harbor or the WTC they have a 100% chance of catching a severe ass whooping."

Ass whoopings are nice, but they have their time and place. The differences between Pearl Harbor in 1941 or the Twin Towers and the Pentagon in 2001 versus the Chonan in 2010 are important, and I submit they are more related to military and geography concerns than culture.

Unlike Seoul, Washington is not within the range of entrenched enemy artillery, nor is it home to as many millions of people nor the share of the nation's population that Seoul is. These facts alone hamstring any attempt to use a military response (though they don't take it off the table were Pyongyang to repeatedly use military strikes). Were this not the case, a now more powerful South Korea might have taken down North Korea years ago.

And moreover, let's not forget that the US did in fact take its time to react militarily to the events of 9/11. Washington first tried to negotiate with the Taliban for custody of Osama bin Laden and the ouster of al Qaeda, and it was only after they refused that the US went to war to oust the Taliban from power. That took nearly a month, putting us into October.

In other words, even by the standards set by the American response to 9/11, it is still too early to say South Korea has done nothing, that North Korea has gotten away with murder, or that the ROK Navy is merely target practice.

Two months ago, I asked what should be done if we got to the point where we are today, but I liked GI Korea's response best:
We are starting to see some of these come together, and China itself is starting to get a headache from the global focus on its client state's bad acts.

As I wrote back then, I quite like the measured and stern response GI Korea proposes, particularly if it includes the final point regarding Proliferation Security Initiative. This would involve forcing DPRK vessels to stop and be searched, ostensibly for the legitimate purpose of preventing the spread of North Korea's nuclear weapons and technology.

North Korea has condemned South Korea's joining of the PSI as piracy and an act of war in itself (but almost everything to them is an act of war). And make no mistake, it increases the risk of further escalation, simply because each time a North Korean vessel is boarded it brings the possibility of a shooting match or other attack. But that risk shouldn't be something that deters the ROK government, only something that prepares it for the possibility that the military must stand at constant readiness.

If I understand GI Korea's suggestion correctly, it would hurt DPRK trade activities (legal and illegal) and deter future acts because of the humiliation associated with North Korea's weakness outside its safe zone being highlighted on a regular basis.

South Korea probably already foiled the plans of whomever launched this attack simply by not playing into their hands with a quick response before it was clear who had done the attack (when there would still be deniability and such a ROK reaction could be seen as rash), and this kind of stern and measured response would further muck things up for whatever person or faction that was.

Any other thoughts on what to do next?