NUMMI factory to be reborn as Tesla plant 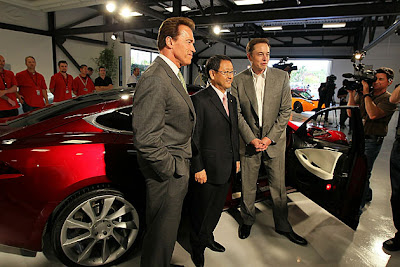 The New United Motor Manufacturing Inc (NUMMI) plant in Fremont, a community in the Bay Area, was a joint venture between Toyota and General Motors that many had hoped would lead to great synergistic leaps but instead became, last month, a casualty of GM's woes. It was the last automobile manufacturing plant in California, and it became a symbol of the Golden State's rusty manufacturing base.

And then, out of the blue, Tesla came to rescue with a plan to make electric sports sedans:

The investment from Toyota was a major coup for Tesla, which has built only 1,000 high-performance Roadster electric sports cars largely assembled in England. Tesla plans to start manufacturing a sports sedan in 2012.

The move comes as a blow to the SoCal community of Downey, which thought they were about to sign a deal with Tesla to convert an old Space Shuttle facility (where relatives and family friends of mine had worked) into this new factory of green automotive technology:


The move disappointed Downey officials who had been wooing the automaker, hoping the company would set up shop in a closed facility that had been used to manufacture the space shuttle.

"We are shocked, upset and betrayed. We can see why the public is so upset with corporate America," said Downey City Councilman Mario Guerra, adding that Tesla had told the city it would sign the lease for the Downey plant on Friday.

For Tesla, which is based nearby Fremont in Palo Alto, the corporate proximity to their new plant makes sense. I, however, had hoped that Hyundai or Kia would eye the NUMMI plant for their next base of operations. Perhaps they'll give the Space Shuttle plant or some of the Boeing facilities in nearby Long Beach a look.