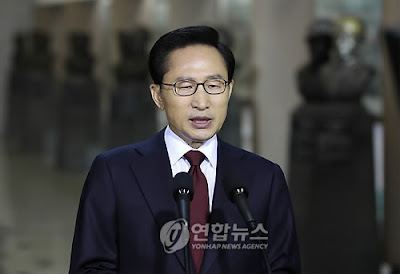 It sounds like someone is listening to me (and GI Korea... mostly GI Korea): South Korea is stopping all trade with North Korea and as an added bonus, closing its shipping lanes to North Korean vessels.


South Korean President Lee Myung-bak said Monday that his country is stopping all trade and most investment with North Korea and closing its sea lanes to North Korean ships after the nation's deadly attack on a South Korean warship.

Lee also called for a change in the North's Stalinist regime.

The tough measures, announced in an address to his nation, were bound to ratchet up pressure on the isolated Pyongyang government and add a new flash point in U.S. relations with China.

"Fellow citizens, we have always tolerated North Korea's brutality, time and again. We did so because we have always had a genuine longing for peace on the Korean Peninsula," he said. "But now things are different. North Korea will pay a price corresponding to its provocative acts."

Lee then said that "no North Korean ship will be allowed to make passage through any of the shipping lanes in the waters under our control" and that "any inter-Korean trade or other cooperative activity is meaningless."

Wow. No pussyfooting around by President Lee. Cutting off trade itself is a huge move, but cutting off access to South Korea's sea lanes (allowed according to the Inter-Korean Agreement on Maritime Transportation) is also a very big deal, especially if Japan follows suit (which it might). I'd have to look into that a bit more, but I believe that basically confines North Korea's boats on the east coast to half of a pond, as the Korea Strait pinches off the southern exit of the East Sea/Sea of Japan.

If Russia does not follow suit, it becomes a very expensive and time-consuming journey north and then around Hokkaido and then south around the rest of Japan and southern South Korea to get to the west coast.

Good on you, President Lee. Those dozens of sailors did not die in vain.

And godspeed to all of us. This is not an end but a beginning.

UPDATE (May 26, 2010):
Here is the English-language version of President Lee's full speech. Courtesy of tiger fancini at Dave's ESL.