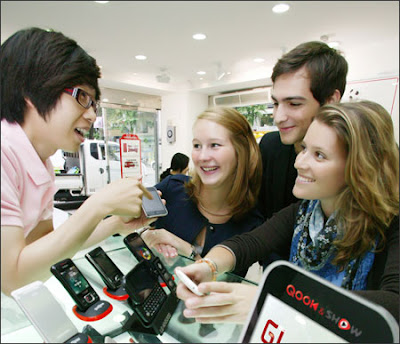 [above: Caption this picture. I thought of a few, but they're all kinda offensive.]

Apparently KT has been listening to all the complaints from foreign nationals who had difficulty connecting to the Borg getting an iPhone in Korea. According to the Korea Times (the other KT), Korea Telecom will rewrite the iPhone contracts to make it easier for some of those who are not ROK nationals or holders of something resembling permanent residency to get them:


KT, the country's second-largest mobile-phone carrier after SK Telecom, announced a set of measures Sunday to make its handsets more affordable and accessible to non-Korean users.

The company's revised service plans for foreigners include lowered visa barriers for registering phones and larger flexibility in phone installment and monthly payment plans. KT will also increase its number of multi-lingual stores in Seoul, where questions can be fielded in English, Chinese, Japanese and other languages.

"The idea is to allow foreign nationals to subscribe to our telecommunications services on the same conditions as Koreans," said Jin Byung-gwon, a KT spokesman.

"The specialized stores for foreigners will be first established in districts such as Itaewon and Gwanghwamun and areas around colleges, such as Kyung Hee University, which are known for their large number of foreign residents. The stores will be introduced in other metropolitan cities and also in Ansan, Gyeonggi Province, which has a large foreign community."

Previously, foreign nationals with F-2, F-4 or F-5 visas, which are issued to those with Korean "blood" heritage, or people married to a Korean national or granted permanent residential status, were able to sign the conventional two-year contracts for iPhones and other mobile phones.

Foreign residents with other types of visas could only get the phones on one-year contracts and also had to buy the handsets upfront and not in monthly installments, which was a strain on their wallets.

Basically, the plans that allowed for the iPhone to be paid for over a period of two years in a way that made it extremely cheap up front were not available to those without citizenship or something resembling permanent residency. KT has now fixed that so that some contract visa workers (e.g., those on certain kinds of E-series visas but not E2 visa holders yet) and student visa holders can enjoy those same benefits.

And now that some of the formerly vanquished have emerged victorious in their fight against The (Korean) Man™, I'm sure they'll take up the mantle for those foreign nationals in, say, the United States who have the exact same problem. Right? Right?!

UPDATE:
I dropped the ball a bit on this one (see first and third comments below) and have tried to fix it by adding the highlighted portions and taking out the strikethru portions.

The failure to find a way to allow E2 visa holders — among the most vocal in the international community — to take advantage of the subsidies allowed by the two-year contracts puts us right back at square one.