There's apparently a lot of criticism toward the president of Zimbabwe presenting North Korean leader Kim Jong-il with a Noah's ark of sorts that includes two of each type of animal found in a Zimbabwean nature preserve.


The experts warned that not every creature would survive the journey to be greeted by Mugabe's ally Kim Jong-il, the North Korean leader.

There are particular fears that a pair of 18-month-old elephants could die during the long airlift.

Johnny Rodrigues, the head of the Zimbabwe Conservation Task Force, said elephant experts did not believe the calves would survive the journey separated from their mothers.

Rodrigues, whose task force is an alliance of conservation groups, said all the animals were captured on Mugabe's orders to be given to North Korea. He cited witnesses and officials in the western Hwange National Park. Witnesses reported seeing capture and spotting teams, government vehicles towing cages, and armed men at key watering holes with radios to call in the capture teams.

You can read more at One Free Korea.

Inevitably, one has to wonder what is going on here. Did film buff KJI take "2012" a little too seriously, and now he thinks the world is about to end (but North Korea will somehow survive)? That may seem a bit far-fetched, but even Noah's critics mocked and ridiculed him, and where are they all now? They're dead. Who's laughing now?

Being from Southern California and having spent half my childhood in Compton, I have a different perspective on the criticism, though. As we've seen in decade after decade since the 1980s, most notably in the aftermath of the Rodney King verdict in 1992, someone in power doesn't want to see the Koreans and the Blacks getting along. 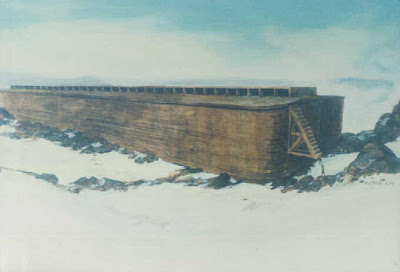 [above: North Korean iconographers have recently discovered that Kim Jong-il was born in the actual Noah's Ark, perched just outside of satellite view on the slopes of Mt Paektusan. Really. They'll show it to you if you ask nicely.]