It's not all that often that a really good Korea-and-Hawaii story comes down the pipeline. We had Michelle Wie, but she left for greener browner pastures. We were supposed to have an influx of South Koreans visiting the Aloha State once the visa-waiver program kicked in, but that has fizzled (so far). There used to be a huge flood of meth coming from South Korea and Taiwan, but locals have learned how to make it themselves. We had that large group of former ROK Marines who came to Pearl Harbor and initiated a bloody pinky-lopping protest against Japanese visits to Yasukuni Shrine last December 7, but I just made that up. 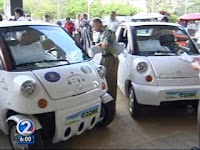 So it is rather cool that I can talk up Hawaii's first car factory, set up by a Korean manufacturer of green vehicles:

The wave of electric cars heading to Hawaii will soon include these models by Korean maker CT&T.

But within a couple years, these cars will also be assembled here.

"Hawaii automobile dealers association-"I never thought i'd see the day that hawaii would have something like a car assembly factory," said David Rolf of the Hawaii Automobile Dealers Association.

The cars will begin arriving soon in completely finished form for now, while the oahu plant itself gets underway.

"We have begun our search for land to acquire. We have narrowed it down to about four sites. and depending on land acquisition we could see something in the area of 18-24 months for the fabrication of the facility," said Joe White of CT&T.

The company plans to spend 200 million dollars on the land and buildout of the facility which it says will also include a resort, theme park and showroom. its designers say it will be completely off the grid.

Hmm... I wonder if anyone told them that Oahu is a really crowded island. Frankly, I think this will be good for jobs, since right now the island's major industries are pretty much tourism and the military, so it would be good to see some expansion into high-tech manufacturing.

At the same time, though, I wonder if environmental groups will allow this to go through. Sure, it's green technology, but it's still a factory that takes up land and resources. After the SuperFerry was torpedoed (figuratively) by a Hail Mary legal challenge to the environmental impact study, I'm surprised any industry would be willing to try. Governor Linda Lingle is promising to expedite permits and what-not, but that's what got the SuperFerry in trouble.

(There is, I suppose, a chance for the SuperFerry to return to Hawaii if they complete the impact study [are they even trying?], but for now, the two catamarans are being used elsewhere, most recently for Haitian earthquake relief.) 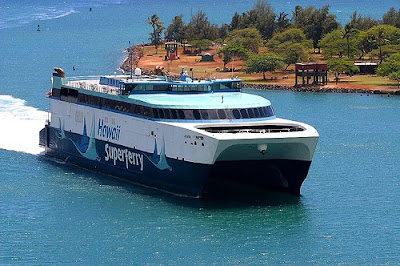 I hope this all works out: Hawaii imports most of its energy needs, which makes it ironic a green automaker that produces electric cars is coming here, but Hawaii is also an excellent place to test out new solar and wind technologies that could be concomitant with rising demand for electric vehicles.

Anyway, best of luck to CT&T, and to whomever gets jobs there. Hawaii is glad to have you!