They're baaaack! (Or, the political experiment that would not die!)

It's a mainstay of horror films and television series: some staple within the fabric of the movie franchise or TV show that assures that — no matter what — the show will go on. Somehow, someway.

No matter how many times Freddy Krueger is buried, incinerated, electrocuted, top-killed, etc., he is always back on Elm Street in the next film. No matter how buildings Alice blows up or zombies she kills, the T-virus is always on the move. A new cell of terrorists always assured Jack Bauer would have gainful employment (and overtime pay) for at least another day, and a new crop of self-absorbed fame-seekers always guarantees another season of "Survivor."

And so it is with the Kaesŏng Industrial Complex just north of the DMZ, that political experiment borne of the Sunshine Policy. It just won't die, not even when frenemies Seoul and Pyongyang temporarily join forces to destroy it: the South by slowly starving it, and the North — fresh off another kill — by an avalanche of vitriolic propaganda and bad vibes.

Even as its obituary was being written about here at Monster Island and in other august halls of journalism, it is back.

So let's just call it the Jason Industrial Complex™.


North Korea expressed its wish to keep an inter-Korean industrial complex in operation, South Korean officials said on Monday, while the South indicated that it could reconsider its decision to revive psychological warfare against the North.

The two movements combined showed that the two Koreas were carefully weighing the option of easing their confrontation, analysts said.

Tensions on the divided Korean Peninsula have deteriorated to their worst in years since a South Korean warship sank on March 26 in a blast blamed on a North Korean torpedo attack.

“Neither side can afford to keep building up tensions,” said Kim Yong-hyun, a North Korea specialist at Dongguk University in Seoul. “Both sides have been raising tensions the way you blow into your balloon, and now they need an excuse for each other to stop blowing so that the balloon won’t burst.”

Wait... What?! We killed the Jason Industrial Complex™ in the last film. In the wake of the report that the North was responsible for the sinking of the Chonan and the nearly four dozen deaths involved, President Lee cut off all trade — except for a reduced presence at Kaesong — but then North Korea swooped in with the coup de grâce and said, essentially, "If you're not going to kill it, we will!" and they were ready to send everyone home. Indeed, there were worries that the South Korean workers who had missed their bus back to Torasan might be held hostage.

But when it comes to North Korea, maybe there are no coups de grâce. For now, it looks like the Jason Industrial Complex™ will be back for a new sequel in the papers. Slice it, burn it, bury it, decapitate it, nuke it, feed it a steady diet of saturated fat, and it still comes back to life. 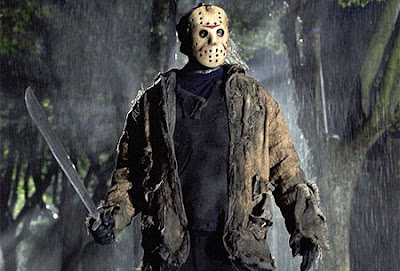 Now don't get me wrong, I think (as did South Korean leaders at the time) that Kaesŏng (that's what it was called before it morphed into Jaesong) was a noble effort to effect change in North Korea that was worth trying (after all, four decades of confrontation hadn't gotten us anywhere). It was meant as a little bit of a Trojan horse to infuse ideas of capitalism into the DPRK.

But Pyongyang had other Trojans in mind, and they prophylactically sealed off Kaesŏng-Jaesong as much as they could.

But eventually, like a once virtuous corporation in a what-could-possibly-go-wrong sorta horror film, Seoul had become invested in this unholy hybrid they had created in the lab. They would lose Sejongs and face if they aborted now, so they let it live. And soon it was sucking the blood supply away from good diplomatic policy, maiming it in the process. It gained a life of its own, becoming a radioactively hot potato, and about two or three sequels ago, Seoul could have killed it when it had the chance, but they were afraid of the fallout. And so it grew and grew, as did our dependence on its growth. And just when we thought that the two sides both finally had the will to terminate it once and for all, it's back. Back with a vengeance (I'm guessing). Will the two protagonists survive to the next reel?

Um... anyway, where was I? Oh, yeah: Kaesŏng a noble effort. (I've never bought the argument that Kaesŏng was propping up North Korea, since China has always been there with its wallet open to prevent a collapse.) The problem with Sunshine Policy, as I've stated before, is that it was all carrot and no stick. Even now, the Jason Industrial Complex™ is apparently being used by the conservative Lee Myungbak administration as a bargaining chip.

Now one could argue that Kaesong/Jason still has a purpose: not only as the aforementioned concession or enticement in future negotiations, but also as a conduit through which South Korean government and business can still keep their foot in the door in order to forestall a collapsed North Korea in the future from becoming China's Inner Cháoxiān Autonomous Region.

So Lee is basically giving us the classic, "This [evil character who keeps coming back] is worth more to us alive than dead." Or, if you prefer, "We'd better hold onto these [super lethal weapons that could easily wipe out a lot of people by accident] just in case."

I wouldn't expect anything less. Welcome to Monster Island (actually a peninsula).