And now we know what Kim Jong-un looks like 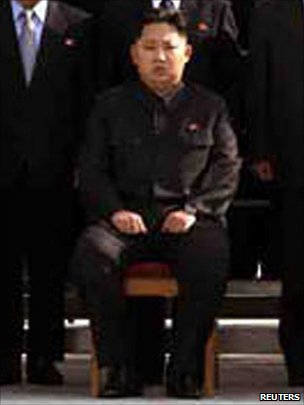 We are finally getting an official glimpse of what possible future DPRK leader General Kim Jong-un looks like (and, boy, was I off).

It is the world's first up-to-date glimpse of the young man who appears set to succeed his father, Kim Jong-il, in a gradual transfer of power.

He is shown sitting on the front row of a group of senior North Korean leaders.

The photograph's release follows a rare meeting of the ruling Workers' Party, at which Kim Jong-un was promoted to top political and military positions.

The KCNA story is here. The Los Angeles Times is using the photo to jump into a discussion about his photo is being received.

And by the way, where's his general hat?

Anyway, I am resisting the urge to title this post "Fat Boy Kim," but man does the Kim family seem to get their share of carbs. I'm not even sure this guy will fit on a pin.

The Brilliant Comrade is only twenty-seven years old, so it may be a bit unfair to point this out, but that chubby baby face really does not inspire leadership and loyalty. And that makes me even more convinced that there will be quiet but determined political opposition to his eventual ascension, resulting in him not becoming leader, or perhaps becoming a mere figurehead.

I just hope he doesn't go all Napoleonic on us and feel the need to prove he's a tough guy. Be nice. Be like the Russian guy with the forehead birthmark, or the Chinese guy who looked like a turtle. 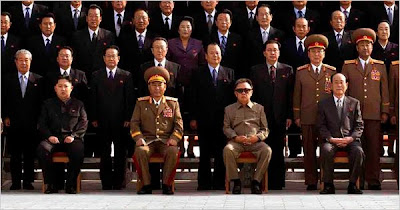 It's hard to tell from these photographs where people pose with stern looks on their face, but I'm getting a vibe that L'il L'il Kim really doesn't want to be there. I mean, seriously, look at the stress on that face. He is not ready for prime time and he knows it.

In fact, I can imagine the delay of the Workers' Party of Korea conference, over which much ink was spilled, was because Jong-un was telling Dad, "But I don't want to be a despotic dictator! Make Jong-nam do it!"