Is the Yeongam Grand Prix not ready for its primetime "Grand Open"? 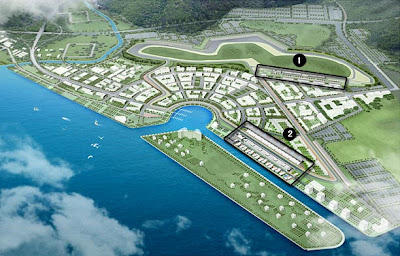 They still have a month and a half or so, but one has to wonder if that's enough for the new track in southwestern Korea's Yŏng•am County to play catchup.


Karun Chandhok did the first demonstration laps of the track on Saturday in a Red Bull, admitting that the venue is not yet complete.

Photos showed some buildings and grandstands are half built, fences missing, run-off areas unpaved and the track with only an initial layer of asphalt.

"How can a Grand Prix take place here?" wondered the German newspaper Bild am Sonntag, captioning a photo of a construction worker carrying materials against the backdrop of a half-built building.

The newspaper said even a full supply of water and electricity is not yet present.

Additionally, many seats in the main grandstand are not installed, while parking lots are not ready to accommodate cars.

"There are problems," admitted F1 chief executive Ecclestone, "but we assume that the race can take place.

"The circuit is definitely ready, but as for all the buildings, perhaps not," admitted the Briton.

"So we may have to put up some tents," Ecclestone joked.

All this, of course, is a follow-up to this story.

I'll just say that I've seen bigger construction projects that were further behind than that finish (barely) on time, though the paint and cement were drying in some spots and, yes, tents or some sort of temporary structure was used. What's wrong with tents for a one-off opening? As for the parking, hire the local Lotte Department Store to get a few toumi and some young ajŏshi-in-training together out there and you could pack a thousand cars into just about any space you want to.


UPDATE (September 28, 2010):
Brian in Chŏllanam-do has a more recent story on whether or not it will be done on time.