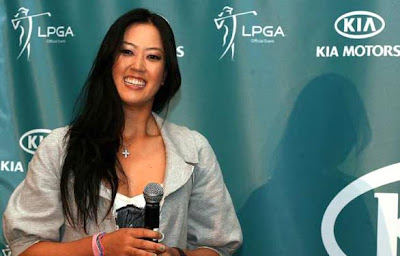 On the occasion of Korean-American golfing prodigy Michelle Wie making an announcement about next year's Kia Classic LPGA event, one Los Angeles Times sports writer commented on her apparent maturing:


She was tall and talented and as pretty as her golf swing. She could hit it a mile and look good doing so. It was a new American dream — fame and fortune before algebra.

The reality was that she couldn't play, at least not on the level of the seasoned female pros and certainly not to where she would storm the tour as soon as she was eligible and become the distaff Tiger Woods. After those booming drives, there was the need for second shots and clutch putts. Those came harder. ...

Now, time has passed. A story that could have ended badly looks as if it won't. Psychologists may have to revisit previous theories. Perhaps a lost childhood can be overcome. ...

Wie didn't make a speech. She answered several scripted questions. But she also sat down for about five minutes with members of the press and new maturity was apparent. The Valley girl is still there — "like, you know, I mean, like" — but the previous distant, bored looks were replaced by eye contact, depth and even humor.

Life is good. She has won twice on the LPGA Tour and was on her way back to Stanford, where she matriculates for about half a year in the two quarters that the tour is most quiet.

"It's nice to win tournaments," she said. "I was sitting there when they were introducing me and they said, 'Two-time winner,' and I was looking around, wondering who that was. Then, I thought, oh, that's me."

College has suited her well. Her major is communications, but not the kind her occasional tormentors — the people sitting around her during the interview —- took in school.

"I'm focused more on the new digital media," she said. "I like the psychology part of that."

She said she likes that many Stanford students seem to have no idea who she is.

Anyway, I remember back in the day Jodi of the now defunct and disappeared Asia Pages would rail against Michelle Wie's popularity despite no real record. Though it did sound a tad borne of jealousy, she did have a point. I, for one, am glad to see her doing well.