A mosque at Ground Zero

In this "crap I make up" piece, I mocked the media and national leaders who have demonized Muslims at the expense of American values while conveniently ignoring the dozens of followers of Islam who were also murdered by the Islamist terrorists who perpetrated the 9/11 attacks. In the same vein in the New York Times today, this article reminds us of the Muslim presence at the World Trade Center back in 2001.


Fekkak Mamdouh, an immigrant from Morocco who was head waiter, attended a worship service just weeks after the attacks that honored the estimated 60 Muslims who died. Far from being viewed as objectionable, the service was conducted with formal support from city, state and federal authorities, who arranged for buses to transport imams and mourners to Warren Street.

There, within sight of the ruins, they chanted salat al-Ghaib, the funeral prayer when there is not an intact corpse.

“It is a shame, shame, shame,” Mr. Mamdouh, 49, said of the Park51 dispute. “Sometimes I wake up and think, this is not what I came to America for. I came here to build this country together. People are using this issue for their own agenda. It’s designed to keep the hate going.”

According to the same article, the closest thing to an actual mosque at Ground Zero was destroyed in the 9/11 attacks by the Islamist terrorists who took down the towers. It was a prayer room on the 17th floor of the South Tower:


On any given day, Mr. Abdus-Salaam’s companions in the prayer room might include financial analysts, carpenters, receptionists, secretaries and ironworkers. There were American natives, immigrants who had earned citizenship, visitors conducting international business — the whole Muslim spectrum of nationality and race.

It is gone now, of course.

In an age of demonization of Muslims and their faith (helped along, deliberately and by design, by those Islamist terrorists themselves), it's as if history has been rewritten so that such things as Muslims who peacefully worshipped in the WTC dying on 9/11 can be conveniently forgotten.

The result is that most Americans oppose "a mosque at ground zero" even though it's not quite a mosque and it isn't quite at Ground Zero. Would-be presidential leaders seem to want to trample the First Amendment in the rush to save our Judeo-Christian republic. 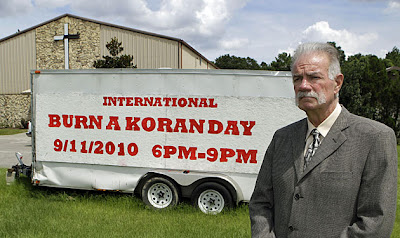 On a completely related note, I wonder how many Americans support the burning of the Koran today. Actually, I do. Well, sort of. Not exactly. But yes.

You see, I loathe the hate-mongering of the so-called pastor of the Dove World Outreach Center in Florida who planned to have a Koran-burning. As a Christian, I wonder (as do others) if he actually understands the New Testament. Jesus would kick his ass out of the temple. (And Gainesville would like to boot him out of town.) I'm glad some Christians are publicly taking a different tack.

But at the same time, I stand up for his right to do it (assuming the Supreme Court doesn't count Koran-burning as "fighting words" or some such).

After all, this is America. We have a First Amendment that is extended to hated Muslims and hate-filled duckweed supposed Christians.

So go ahead, "Minister" Terry Jones. It is your right as an American to do something so incendiary (literally and figuratively), so foolish and ignorant, and so hate-filled.

I am dismayed, however, that so many people seem to see the Florida minister and Imam Rauf (the man behind the Cordoba House that has been called "Ground Zero Mosque") as equivalents. The minister's acts are the essence of bigotry and religious animosity, while it is (many in) the Imam's opposition that is acting out of bigotry and religious animosity.

Sigh. At least President Obama got it right today:

Now, I recognize the extraordinary sensitivities around 9/11. I've met with families of 9/11 victims in the past. I can only imagine the continuing pain and anguish and sense of loss that they may go through. And tomorrow we as Americans are going to be joining them in prayer and remembrance. But I go back to what I said earlier: We are not at war against Islam. We are at war against terrorist organizations that have distorted Islam or falsely used the banner of Islam to engage in their destructive acts.

Why does that have to be spelled out? Were Barry and I the only ones paying attention in 12th grade Civics class?

Do those who see all Muslims as enemies not realize that they are playing into the hands of Islamists like Osama bin Laden who want us to toss aside our freedoms and values and blindly join in their endeavor to create a clash of civilizations?