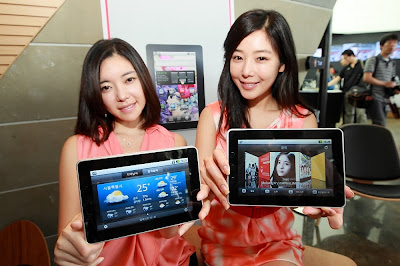 I suppose I would get excited about Korea Telecom's launching of an Android-based iPad killer, but I'm not in Korea where I could buy it.

Also, ever since I got my iPhone 4 with the retina screen, no tablet — not even Apple's own current iPad — can excite me. Nothing. Looking at any other monitor is, well, just so blah.

But I do wish to note that I think KT's timing could mean this product will be a hit. Apple still hasn't released the iPad in South Korea, not even the wi-fi-only version that doesn't require marriage with a cellular service provider like KT (which carries the iPhone). And at $411 without a contract, the pricing is competitive against the iPad.

In fact, just last week at the Apple Store in Ala Moana, I helped two random Korean tourists buy an iPad. Though they hadn't flown to Honolulu just to get an iPad, it was at the top of their to-do list, just above Waikiki and visiting Pearl Harbor to protest against udon restaurants so close to the USS Arizona.

Email ThisBlogThis!Share to TwitterShare to FacebookShare to Pinterest
Labels: iPad (shoulda been iSlice)