South Korea buckles and decides to give $8.4 million in aid to North

Last week Kim Jong-il took his son Kim Jong-un, slated to be the next demigod of the North, on a trip-down-mythical-memory-lane tour of northern China. It included visits to the school where the Great Leader studied, the area where he fought Imperial Japanese soldiers, the town where he sought refuge for his family, and finally, the large Beijing government compound where he often went hat in hand to beg for money from the Chinese authorities.

But, as the Christian Science Monitor reports, the Dear Leader's own attempt this time to exact funds from Beijing was a bit of a failure. So the South Korean government, seeking a way to assist in the humanitarian disaster following the annual "worst-in-decades" flooding, has announced plans to donate $8.4 billion million in aid (because at least one Korean government should care what happens to North Korean peasants):


In its first offer to North Korea since the sinking of the Cheonan Navy ship, South Korea has pledged billions of dollars in humanitarian aid to help North Korean flooding victims.

Yonhap News Agency reported today that South Korea on Tuesday pledged $8.4 billion to North Korea, where flash flooding in August displaced tens of thousands of people along the Korea-China border.

The Red Cross puts the death toll from the flooding at 14, though South Korean aid group Good Friends says that 32 people have died, according to Yonhap. The Seoul-based news agency also reported that Pyongyang has yet to respond to the aid offer, but South Korea is preparing the shipment in anticipation of its acceptance.

In mid-May, South Korea froze all government funds for North Korea, just days before an international investigation found that the Cheonan warship was sunk by a North Korean torpedo.

Chinese state-run news agency Xinhua reported that the new aid offer is "a means to defuse tension on the divided peninsula."

North Korea may have few alternatives but to accept the aid from Seoul, as The Chosun Ilbo reported that Kim Jong-il failed to procure significant aid from China despite his trip there last week. A South Korean official told Seoul-based daily that this was the second time this year that North Korea had been unable to drum up Chinese aid, the first being in May. But the August flooding has particularly underscored the latest episode:

Some would question the wisdom of providing aid to North Korea at a time when the regime at the edge of the abyss is sinking South Korean ships and cracking down on its people, but perhaps tightening the screws on the Pyongyang elite shouldn't come at the expense of the provincial peasants.

Just make sure there's a way to make guarantee that most or all of this gets to the people for whom it was intended. I recommend embedding RDIF tags or some such in the donated items' packaging. 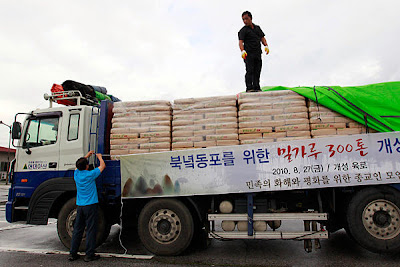