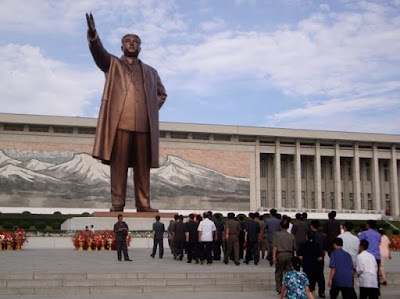 In case you're playing catchup with the news, NPR has a good overview of what all the North Korea watching is about:


It is reasonably certain that the name of Kim's third son is Kim Jong Un. Confirming facts about him after that starts to get tough, says David Kang, a Korea watcher at the University of Southern California.

"We know very little, even people who watch very closely," Kang says. "We don't even know his age."

Best guess: 27. Not a single Western diplomat or journalist or specialist has met him.

The secrecy is not limited to the outside world, says David Straub, a longtime Korea specialist at the State Department, now with the Korea studies department at Stanford University.

"Kim Jong Un has not even been announced in North Korea," Straub says. "I don't think they've ever mentioned him publicly in North Korea, much less published photographs of him.

And speaking of the certainty surrounding just his name, I personally was a bit dismayed that even the South Korean media and government originally thought from the "Kim Jong-un" spelling that the Brilliant Comrade's name was 김정운 (Kim Chŏng•un in McCune-Reischauer) and not 김정은 (Kim Chŏng•ŭn in M-R). In all seriousness, that did not inspire much confidence in South Korean intelligence resources one bit.

At any rate, if Mr Straub is right about the complete lack of information available about Kim Jong-un, I wonder how certain this dynastic succession really is. Maybe I really should put some money on his sister, Kim Yojong.