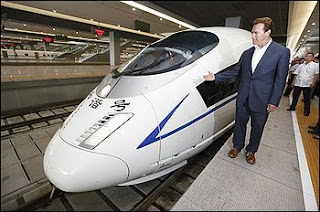 Loyal Monster Island readers should know that high-speed rail is coming to California, and Korea's existing system, the KTX, is being held up as a model (along with high-speed rail in other countries). Well, it looks like our governor (Arnold Schwarzenegger, you may have heard of him) is taking a tour of Asia to check out the rail systems in China, South Korea, and Japan:


Schwarzenegger had a photo opportunity Sunday at a train station on a high-speed rail link between Shanghai and Nanjing. He spent Saturday, the first day of his weeklong trade mission of nearly 100 business leaders, hobnobbing in Hangzhou with Jack Ma, founder of Internet trading behemoth Alibaba.com, and other Chinese entrepreneurs.

The governor will also try out high-speed rail in Japan and South Korea - two others among at least seven countries that have officially shown interest in helping develop California's system - assuming the state can find the money.

"There is great potential over there and in Japan and Korea, when it comes to building our high-speed rail and also providing the money for building the high-speed rail," Schwarzenegger told reporters before leaving California.

The fact-finding mission is also aimed at better understanding the technologies on offer.

He'll probably check out the plans for even faster railway lines currently under construction in South Korea and Japan.

South Korean technology should also be familiar to the Gubernator, what with SoKo trains already being put to use in SoCal.

I hope he reads this 2006 post before he rides the KTX. I'd hate for him to not get a seat or end up with motion sickness.