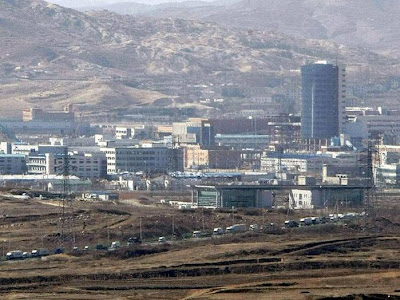 Despite all the inter-Korean tension that erupted with the sinking of the Ch'ŏnan, despite efforts by Washington to step up sanctions against Pyongyang (what Joshua Stanton of One Free Korea calls Plan B), and despite real concerns that the Lee administration would have to just get up and walk away from the infrastructure already in place in Kaesŏng, we have an odd report that Seoul is in talks to expand the Kaesŏng experiment with another industrial complex:


The governments of both North and South Korea are in talks to build a second industrial complex in Kaesong, the southern province of North Korea.

According to Lee Myung-bak, President of South Korea, a second industrial complex may be built by South Korea if the North implements changes. “The ball is currently in the camp of the North” Lee said in an interview with a Russian TV station.

Frankly, I think there's a good chance that this report has simply gotten it wrong, with the writer or the news agency for whom he/she works simply operating from a skewed translation (that happens a lot) or otherwise having their facts mixed up. After all, the report also says that "a free trade agreement is in place between the US and South Korea," which is not quite right, either.

Still, anything is possible. Seoul has been denying reports of secret high-level meetings between ROK and DPRK officials (including expected future regent Jang Songthaek, uncle of Kim Jong-un), but things denied are often things that have really happened, so who knows.

With a slight majority of the South Korean public skeptical of Seoul's take on the Ch'ŏnan sinking, it's plausible that some in the Lee administration may have felt there was no point in hardline sanctions against Pyongyang. Perhaps the release of the seven South Korean fishermen held for the past month was meant as a bit of quid pro quo for reconsideration of restrictions on Kaesŏng.

And if I'm right about my bold prediction that North Korea is planning to pursue Chinese-style economic reforms, then it would make sense not only that they would pursue an expansion of the Kaesong Industrial Complex, but that Kim Jong-il's brother-in-law Jang would be spearheading it or be otherwise involved.

If that were the case, it begs the question: How should Seoul proceed (or Washington or Tokyo, or Taipei for that matter)? If Pyongyang is genuinely and earnestly embarking on its own sunshiny project, should South Korea, the US, and Japan hold their noses and cooperate in the hope that these reforms will, à la China, dramatically change the lives of the average citizen for the better, even if it doesn't completely alter the totalitarian nature of the regime?