Will this get you to pass the FTA,
Senator Baucus?

Bloomberg says that the US Department of Agriculture (USDA) expects South Korea to increase imports of American pork and beef in 2011:

South Korea, once the second-largest buyer of U.S. beef, began restricting shipments almost seven years ago, following the discovery of bovine spongiform encephalopathy, or mad cow, in the U.S. herd. The Asian country resumed imports of the meat from cattle up to 30 months of age in June 2008.

“There are still a sizeable percentage of fence-sitting consumers who still haven’t started buying U.S. beef again,” the FAS said. “Marketing efforts are being targeted at winning these consumers back.”

That 299.8 million pounds is still a far cry from the 586.6 million pounds of beef that South Korean imported before the Mad Cow scare in 2003 (which had lots of countries besides South Korea cutting off imports of US beef, including Japan and Mexico, so it's not just the chinboistas' fault). So get working on that public relations stuff (start by telling them this is all lies... All lies!).

You can try convincing me, the Skeptical Mr Kushibo, by employing more frequent and more thorough inspections and less reliance on factory farming, so that Obama won't be full of shit when he says that American beef is the "safest in the world."

You might also try to do something about Australia, your new competitor that snuck in while you were gone. 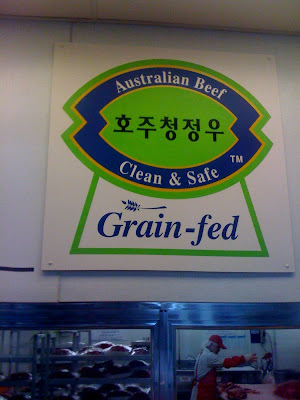