Abstract:
Former President Carter may have met Kim Jong-il on his last trip. And may have offered him things. And talked about Aijalon Mahli Gomes's condition and stuff.

Wordy essay:
When former President Jimmy Carter went over to North Korea to fish out Holy Roamer Aijalon Mahli Gomes, it was widely reported and generally assumed that he did not end up meeting Kim Jong-il.

Since it was always figured that high-profile visits by the likes of former President Bill Clinton or Carter are what the status-hungry DPRK craves, it was puzzling that KJI would take off just as Carter was arriving.

The Dear Leader, so the speculation went, had snubbed Carter when he chose instead to make a last-minute trip to northeast China (where, many believe, he was getting Beijing's approval for the ascension of his son, Kim Jong-un, but I, Kushibo, believe he was getting permission — or perhaps even orders — to do Chinese-style reforms). Either that, or KJI was afraid of the Carter Curse™. 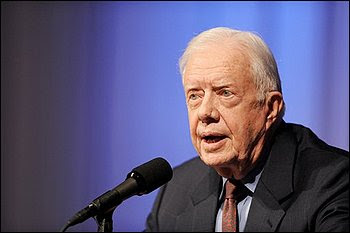 So far, so good. Joshua at One Free Korea noted that the snub may have been a good thing, because it made it harder for Carter to offer anything other than a suitcase full of gourmet organic peanut butter in exchange for Mr Gomes's freedom.

But wait... Perhaps Mr Carter did in fact meet Kim Jong-il on this last trip. I hold this out as a possibility simply because Mr Carter, in a discussion at the Carter Center, didn't say one way or the other:


The 2002 Nobel Peace Prize winner would not say if he met with North Korean leader Kim Jong Il. But he said he spoke with leaders who told him "they were eager to have peace talks that will lead to the denuclearization of the peninsula and a permanent peace treaty with the U.S. and South Korea." [AP via WaPo]

Why would this be a secret? If he didn't meet him, then he didn't meet him. But if he did meet him and there was something he wasn't to reveal (like KJI's physical condition?) then the "cannot confirm or deny" response would make sense. Not saying it's the only possibility, but it is a plausible reason.

And perhaps Carter did make some offers Pyongyang wouldn't refuse. I'm gleaning this from the title of the AP article ("Carter hopes prisoner release helps peace talks") and this quote:


"We didn't have any communication with North Korea, so they called and asked me to come over there to get Mr. Gomes," the Georgia Democrat said during a discussion at the Carter Center. "They said they would not let him go to anyone except me. Obviously, they wanted me to come back over there."

Reading between the lines, it seems quite likely that someone in the Pyongyang regime had Mr Carter come over to talk about returning to the denuclearization talks because they could extract a quid pro quo from him.

The talk also went into the conditions of Mr Gomes's incarceration:


Carter said doctors determined that Gomes, of Boston, had been treated "superbly" during his seven months in prison and that North Korean officials gave him his own prison cell. He also said Gomes was given his own hospital room in the country's capital, Pyongyang, after he tried to commit suicide, but he did not elaborate.

"Treated superbly"? Sounds a bit different from what some had speculated. I guess if it's not true, Mr Gomes himself might speak up eventually.