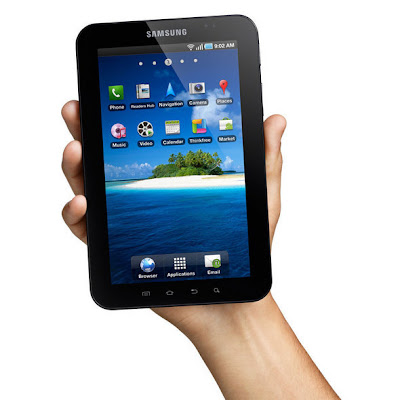 The other day we had KT's offering, and today we officially have one from Samsung.


Can Samsung take on Apple in the tablet space? It sure thinks it can. Its new tablet has Google's Android 2.2 Froyo operating system and a number of specs that compare to the Apple iPad.

First, the display. It is a seven-inch TFT-LCD screen with 1024 x 600 pixels. The iPad's display is 9.7 inches, and has 1024 x 768 pixels. It's possible that the smaller size paired with a similar pixel count could make the Tab's display look better than the iPad's. I can't say for sure without seeing them side-by-side.

PC Magazine had some more information last month. I gotta say that "Tab" is a kind of uninspired name. I think they were trying to do an anagram of sorts (in Han•gǔl) involving pad.

I, of course, will get neither of these, but not because I'm an Apple fanboy. As I stated in the KT tablet post, once you've gone retina you'll never go back, and that means I won't get an iPad unless they upgrade to a retina display. Even this MacBook Pro screen annoys me.