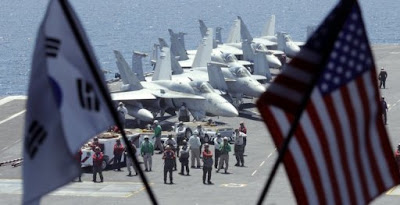 With Typhoon Kompasu having done quite a lot of damage to the capital Seoul and much of the rest of the peninsula, the military commands for USFK and the ROK forces decided to postpone the anti-submarine exercises. After finding that a DPRK submersible may be responsible for the sinking of the Ch'onan, such "games" (is that the right word?) are important, both in terms of training and sending a message.


The exercises were scheduled to begin Sunday and run through Thursday, the forces said in a statement. Tropical Storm Malou is forecast to arrive in the region Monday.

Military officials said the exercise could have gone ahead despite the weather, but safety concerns prompted the postponement.

"Although the alliance is capable of operating in all weather conditions, this decision was made in the interest of safety for the participants," the U.S. military said in its statement. "Both high winds and heavy seas would have directly impacted the exercise area and the training objectives."

Whew. I for one am glad they reassured us that "the alliance is capable of operating in all weather conditions." If we couldn't defend the country in times of, say, a downpour or a blizzard or icy road conditions, that would really, really suck.

And I'll be honest, in my bleary-eyed state this morning, I had misread that they were cancelling submarine exercises, and I was all set to snarkily wonder if we had a fleet of submarines that couldn't operate in the wet. I'd hope that about North Korea's navy, but not ours.

But like I said, that was a misread, and it's only our ships and planes that aren't waterproof.