Islamaphobia and
the law of unintended consequences

I'd been getting a lot of traffic today to this post, an April 2009 piece addressing some of my concerns about factory-farmed meat that included this picture of a pig waste lagoon somewhere in the American South (North Carolina, I think).

[UPDATE: in Georgia. That's right: Even I don't read my own posts.] 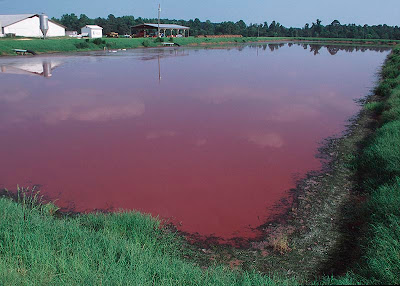 The traffic was coming from a Russian-language site, so I had to Google-translate it.

Lo and behold, apparently they were discussing ways of hemming in Muslims, such as by burying pig ashes and pig waste in places you wanted Muslims to vacate or otherwise be Muslim-free zones. I guess someone came up with the idea of having these giant pools of shit in America shipped off to Islamaphobic regions that wish to employ this idea.

For the record: Kushibo does not endorse this plan whatsoever.