It should come as no surprise to my readers that I sometimes feel that Robert Park — he who traipsed into North Korea with the demand that Kim Jong-il resign from his position and unshackle the North Korean people on his way out, only to be followed by his friend, the equally quixotic Aijalon Mahli Gomes — really sticks in my craw. 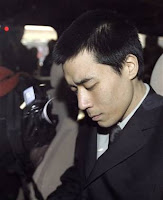 Frankly, although he and I are both deeply troubled about the plight of people stuck under Pyongyang's thumb and the North Koreans who have escaped but remain in hiding in China, I have made no secret that I think his consternation is fatally muddied by an apparent Messianic complex (or at least a Mosaic one).

And according to this article in Christianity Today, Mr Park seems to be coming around to my point of view on the futility of his media whoring publicity stunt:


"My hope was, through sacrifice, that maybe there would be repentance and people could come together to address issues in North Korea," he said.

But Park said that did not happen.

"It takes work, and the church and human rights groups have to realize the most important thing is that we come together," he said. "This generation has to be captivated and compelled because this is the most systematically intentional genocide since the Holocaust."

Park says he is not angry with God, but he is frustrated with the church.

"My wish and my hope and prayer is for the church to rise and spearhead the move for liberation," he said.

That first paragraph still sounds a bit like it's all about him, but at least he recommends something that I've been saying all along is the best way for those feeling the need for personal sacrifice (of the monetary or bodily variety):


Park says one of the best ways for Christians to help North Koreans is to redirect money to refugees and North Koreans assisting refugees.

"North Korean people know how to get money to hard-hit areas that can lead to family reunification and food going to inaccessible areas when other organizations are not quite as urgent or knowledgeable," he said. "The North Korean people themselves love their homeland and they desire liberation more than anyone else—their hearts are in North Korea."

Here we agree as well.

Nevertheless, my opinion that Mr Park may be both Messianic and suicidal remains strong. In an earlier Christianity Today article, he actually talks about his motivations to commit suicide:


Park says his concern for Gomes and frustration over the lack of media coverage and response to his friend's imprisonment have led him to speak out—and were the cause of his plans for a July 16 suicide demonstration.

Park said he was ready to end his life because nothing was being done, "but God stopped it through the intervention of a friend."

"I was planning to kill myself with a suicide note to bring attention to Aijalon—I feel responsible for him being there," Park said. "He is one of my best friends, and I prayed for my life to be taken and not his."

A suicide demonstration?! Clearly this is a troubled man, and it is incumbent on organizations like Christianity Today that trot him out before the media to also keep a watchful eye on his darker side. Sure, let's highlight him singing the praises of getting real work done to help North Koreans in the PRC and the DPRK, but keep him away from the soapboxes.