Is America ready for the Equus? 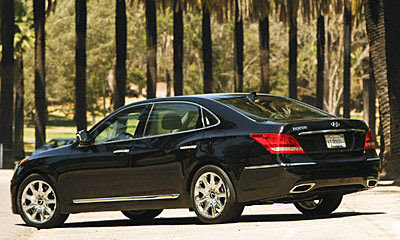 After getting rave reviews for the quality and style of its latest options, including the Hyundai Genesis which was chosen as 2009 Car of the Year, it seems Hyundai has indeed arrived.

But Hyundai's early track record in the US (i.e., about two decades ago) prompts the Los Angeles Times to ask the obvious:


With a dark burled wood dash and steering wheel, soft leather upholstery and brushed metal accents, the spacious interior oozes opulence. The driver's seat has a built-in massage system. The back seat offers a refrigerated compartment to keep drinks cool. A powerful 4.6-liter, V-8 engine with 385 horsepower sits under the hood. No less than nine airbags keep passengers safe.

0nly the "Flying H" corporate logo on the trunk lid gives any clue to the car's origin. Is America ready for a $60,000 luxury car from South Korea?

That $60K vehicle is the Hyundai Equus, the car with the funny name (I think, what with it being associated with a naked Harry Potter gouging out horses' eyes and all) that we've been hearing since last year would eventually be brought to the US.

And just in case you aren't too clear on Hyundai's problems back during the era of "L.A. Law," the LAT reminds you:


That the question would even be asked represents a remarkable turnaround for an automaker that once produced some of the worst cars sold in America. Underpowered and unreliable, the early Hyundais first introduced in the U.S. in the late-1980s were inexpensive and sold briskly until people learned just how bad the autos were. Similar dependability issues chased import brands such as Renault and Fiat from the U.S. market, but not South Korea's Hyundai Motor Co.

But that sets the stage for their comeback, and what's right with Hyundai now:


Hyundais are now thought of as well-built, utilitarian autos with a touch of stylish pizazz. This has set the stage for the launch of the Equus, a luxury car designed to compete with the likes of the top Mercedes and Lexus sedans.

To be totally honest, I'm not the target consumer for the Equus. If I had sixty grand to spend on a vehicle, I would buy a thirty or forty grand vehicle and then put the rest toward a nice boat. [After getting out of grad school and landing a steady job, I will likely consider a Hyundai Genesis, but for right now I'm happy with my used Honda Passport (a rugged but practical SUV) and my Kia Carnival/Sedona (formerly a company vehicle that eventually morphed into my personal vehicle).]

But if I were in the market, I'd look at quality, comfort, reliability, and safety, not brand name cachet. I'd be quite self-satisfied if I had as good a vehicle as my friend or relative driving a Lexus or a BMW but I'd paid ten grand or so less, even if it we're talking about a "luxury" vehicle where prestige comes into play. It would help cut down on the ribbing, however, if the cheaper luxury vehicle I'd bought were moving upwards in terms of high-end consumers' perceptions. And doing something cool like putting the owner's manual on an iPad that is thrown in with the car probably helps.

The question for Hyundai, then, is how many people think like me?


Recently, Hyundai has made progress moving upscale with its line of Genesis sedans and coupes, which sell in the high-$20,000 to mid-$30,000 range, depending on trim levels. Yet even at that price point some owners attempt to hide who built the vehicle by replacing the Hyundai logo on the trunk lid with a winged Genesis badge that dealers sell from their parts department.

Len Wahlert, a retired aerospace executive, BMW driver and former Lexus owner, said the swap is pretty common among the retirement crowd in La Quinta. And that's one reason he thinks the automaker would have trouble selling cars at roughly twice the price.

"People who shop for cars at $50,000 or more won't buy a Korean car now," Wahlert said. "I think they will find that shifting up has a ceiling."

If they find that that ceiling won't budge, perhaps we will see Hyundai decide to spin off Genesis as its own brand. While the existence of two rather distinct Genesis models — the luxury sedan and the sporty coupe — suggests that's an eventual possibility, I hold out that Hyundai would rather see their Kia brand remain as the everyman's car while Hyundai eventually rises to a more upscale marque.