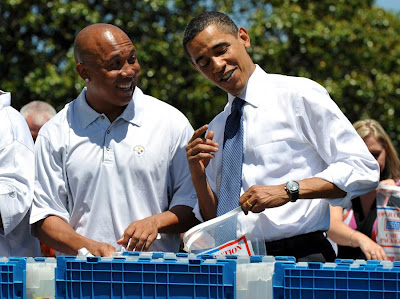 Hines Ward, to South Koreans probably the most famous Korean-American, has been given a White House appointment. Specifically, the celebrated quarterback wide receiver for the Pittsburgh Steelers will serve on the President's Advisory Commission on Asian Americans and Pacific Islanders.


Hines Ward is a professional football player for the Pittsburgh Steelers who was voted MVP of Super Bowl XL. Born to a Korean mother and an African American father, he has long been an advocate for biracial youths. He is actively involved in various philanthropic initiatives, including starting his own foundation, the Hines Ward Helping Hands Foundation, which seeks to help mixed-race children suffering from discrimination.

It seems like only five years ago that we were told five years later nobody but football fans would remember who he is. And being on a commission to advise on Asian-Americans? Not bad for a guy with merely "a fraction of kimchi blood."

Seriously, as I stated back in 2005 and 2006, Hines Ward has become a catalyst (actively and passively) for changing attitudes toward honhyŏrin in South Korea.