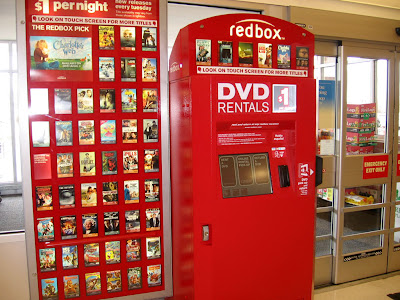 The Economist has a piece on the demise of Blockbuster Video, the click-and-mortar store (as opposed to brick-and-mortar shoppes) that found itself sandwiched between online upstart Netflix and even upstartier in-store kiosk rental system Redbox:


IN THE early days of the commercial internet, it was often predicted that pure e-commerce sites would begin to struggle as bricks-and-mortar stores moved online. “Clicks-and-mortar” stores, which could reach consumers both on the internet and on the high street, were thought to be inherently superior. Surely Blockbuster would be able to crush Netflix, an online service that rents DVDs through the post? Surely Barnes & Noble, a bookseller, would easily see off Amazon?

As it turned out, they could not. Shares in Barnes & Noble have slumped over the past few years as those of Amazon have soared. The British arm of Borders, another media retailer, went into administration last year. And on September 23rd Blockbuster filed for Chapter 11 bankruptcy protection in New York. The firm, once owned by Viacom, a giant media conglomerate, aims to reduce its debts by about $900m. It is likely to close some of its 3,000 American stores. (The company’s non-American operations and franchised outlets are not affected by the bankruptcy filing.)

The growth of Netflix, a technologically savvy company with a vastly superior website and an attractive subscription model, was hard on Blockbuster. But the firm was caught in a pincer movement. On one side was Netflix. On the other was the decidedly low-tech Redbox, owned by Coinstar. Redbox rents films for one dollar a night through kiosks in drug and grocery stores—a 1950s technology applied successfully to a new medium.

I'd written occasionally about my Blockbuster membership (here, here, and here), and briefly mentioned the Netflix membership I currently have, but never went into detail about why I switched. As briefly as I can explain, Blockbuster ended their unlimited in-store exchange policy, making their $12/month membership far less worth my while (I would take my by-mail DVDs and exchange them at the store for another title, which I'd watch while I waited the couple days for the next by-mail DVD). 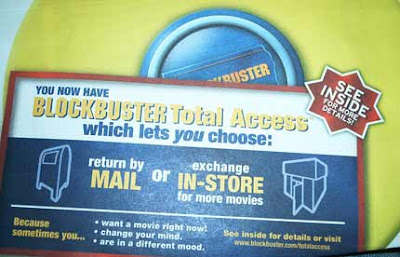 I even wrote to them asking that I be grandfathered in with the old policy, but it was clear that no thinking human being had actually read my letter: the response was a form letter saying sorry that you won't be with us anymore. I still get form-letter emails asking me to return and telling me what I'm missing.

Meanwhile, I got myself a Netflix membership. For $9/month, I get unlimited DVDs by mail (only one at a time), but I can also watch their entire online library for free. Granted, the online library is only about one-fourth of their entire library (something that poses a serious problem for Netflix), but I still have close to five hundred titles I've yet to watch. I have given the by-mail DVD subscription to my mother as a perpetual birthday present, while I use the same membership to watch movies online.

I'm not so sure if Blockbuster couldn't compete, or they just gave up trying. I could tell from the employees at the Kapiolani Boulevard Blockbuster that there was an atmosphere of defeat. And that's too bad; I enjoyed chatting with the staff (some of whom I developed a good rapport with) and asking them about this movie or that, a service that Netflix doesn't really offer.

Back in Seoul, I hadn't had a video membership since I moved out of my old neighborhood, when I would by VHS tapes and later DVDs (the latter of which usually had English-language subtitles, which helped with the ten percent or so of the movie I didn't understand). There was no real demand for video store chains, and with cable TV and online sources (which would preclude the need for a Netflix-like service), those mom-and-pop brick-and-mortar video shops are an endangered species as well. The one in my old neighborhood has morphed into a convenience store with the DVDs on the side. Progress?