Paris in Tokyo: No entry to Japan based on drug use in America 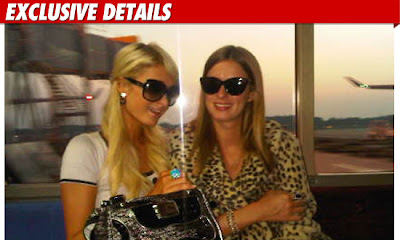 
Paris Hilton canceled her Asia tour and returned home when she was denied entry at Tokyo's airport Wednesday following a drug violation in the U.S. — running afoul of strict Japanese laws that have tripped up celebrities from Paul McCartney to Diego Maradona.

''I'm going back home, and I look forward to coming back to Japan in the future,'' a smiling Hilton told reporters before departing on her private jet.

The 29-year-old celebrity socialite had arrived at Narita International Airport, outside the Japanese capital, two days after pleading guilty to a misdemeanor drug charge in Las Vegas. Japan has strict immigration laws that bar entry to those convicted of drug offenses, although exceptions are occasionally granted.

When the whole world's on Twitter and TMZ, I guess what happens in Vegas doesn't exactly stay in Vegas. Too bad, Tokyo, Kuala Lumpur, and Jakarta. (I wonder if Ms Hilton is still minus a clue or two and actually took coke and pot with her on this trip; the consequences in Malaysia and Indonesia could be far more severe than just being turned around at Narita.)

Funny that the New York Times article at top fails to mention that the drug in question was cocaine, a bit more serious than your run-of-the-mill pot, but I guess some would be concerned about governmental overreach when a country on one side of the globe can do something so serious as deny you entry — and interfere with your business obligations — because of a misdemeanor (yep, in Clark County, coke possession is apparently a misdemeanor) a quarter of a world away.

TMZ is reporting that Paris has been allowed to stay in an airport hotel (the simple life, indeed) while this gets resolved. Her appeal to enter the country may include pointing out that she loves Japan so much that she calls two of her dogs Tokio Blue and Harajuku Bitch (no, I'm not making that up), apparently named after, respectively, some pills she got hold of in Shibuya one time and a particularly rude shop clerk (okay, I'm making this part up).

She's not sure if she's going to stick around or not, but if all goes well with her appeal, NRT could become her new BFF.

And if you still haven't had your daily fill of Paris Hilton...