And speaking of construction in North Korea...

It looks like a couple buildings are in the works at the controversial Yŏngbyŏn [영변/녕변/寧邊; Nyŏngbyŏn] nuclear site.


North Korea is restoring facilities at its Yongbyon nuclear reactor, the source of weapons-grade plutonium in the past, South Korea's defence ministry said Tuesday.

"North Korea is restoring nuclear facilities and continuing maintenance activities at Yongbyon," a spokesman quoted Defence Minister Kim Tae-Young as telling parliament on Monday. "It is engaged in new construction and large-scale excavation."

The foreign ministry said the South is closely monitoring the work.

"There are some activities going on but we have no information on what these are for," said spokesman Kim Young-Sun. "The government is watching closely the activities there and exchanging information with other countries."

An unidentified government official was quoted by Dong-A Ilbo newspaper as saying that two rectangular buildings were being built next to the site of a cooling tower demolished in 2008.

My money's on two competing Starbucks, but I've been wrong before. Maybe they're blowing stuff up and then rebuilding it just to keep the economy going. 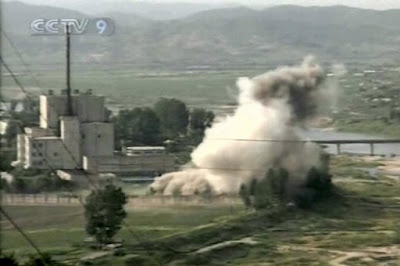