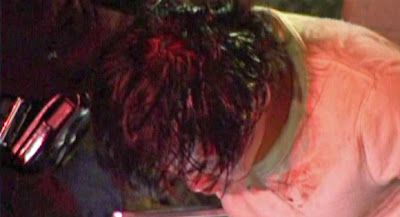 The Los Angeles Times has an article about a Koreatown couple who ignored the usual advice of just giving armed intruders what they want, and instead put the guy (a ROK national) in the hospital:


But the man grabbed her and put a gun to her head, demanding money, authorities said.

They returned inside, where the woman gave suspect Keon Kim, 26, her wallet, Corona said. Unsatisfied with the $120 he found inside, Kim, a Korean national, took the woman into the bathroom and demanded to know who else was home, police said. She told him her boyfriend was.

When Kim left the bathroom to find the woman’s boyfriend, the woman screamed, waking her boyfriend.

The two men, Corona said, began to fight, throwing punches and scratching. The altercation spilled into the bathroom, then back outside the apartment -– all while the suspect kept control of his gun.

The boyfriend called out to his girlfriend to call 911. On her way back outside, she came across a golf club. She dashed outside with it and struck the man twice in the head so hard that the club broke into two.

“At that point, he manages to get up,” Corona said. “And he decides it’s time to go home.”

But the boyfriend chased him down to the second floor, where they continued fighting until police arrived.

The article doesn't say whether the couple themselves are also Korean (and in Koreatown, that wouldn't be a given nowadays), but I'd say in general it's probably best for KoKos in the US to realize that going after someone who has a gun with anything less than a gun is not wise. Don't do it unless you absolutely have to (and 120 bucks or some jewelry and electronics are not worth your life).

Criminals in South Korea, thankfully, almost never carry firearms, so it's reasonable to assume you've got a good chance of fighting back using a golf club. Not so against a handgun. Just sayin'. [Also bear in mind that when the cops arrive, they don't always know who the real criminal is right away.]

This public service announcement has been brought to you by 'Bo from the 'hood, straight outta Compton.