BBC has posted this video, billing it as a sighting of Brilliant Comrade and heir-apparent Kim Jong-un in a joint appearance with his father, Kim Jong-il, while the two watched a parade marking the 65th anniversary of the founding of Workers' Party of Korea or something. BBC is also billing this as the first live video from Pyongyang. 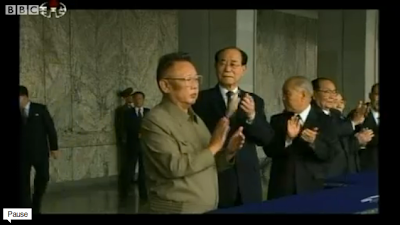 Above is a still from that video, showing Kim Jong-il (looking healthy, by the way) on the dais. Kim Jong-un, whose rise to power is being largely ignored by the KCNA, is nowhere to be seen (and that other guy seems to be looking for him, too).

So what does this mean? There are two take-home items from this. First, the Western media seems really hell-bent on everyone accepting the idea that KJI's son will be the next King Jong, even when it doesn't seem to fit.

Second, the DPRK regime allowing a live broadcast from Pyongyang is a very big deal. Less than its significance as a loosening of control (and it is, but probably just a little), it is a signal of North Korea opening up, or at least trying to appear that it is opening up. If I'm right about China pushing North Korea to adopt Chinese-style reforms, it would seem that this very act of normalcy is a part of that activity (or act, whichever you prefer).

UPDATE:
Oh, wait. There he is. Thanks to the links at ROK Drop, I managed to find the AP video feed, which shows KJU on the same dais as KJI, but sort of standing apart. I mean, if KJI were to suddenly collapse, KJU wouldn't even be able to catch him.

I provided a still below. Kim Jong-il is standing behind the giant PLAY button, some sort of high-tech protective barrier. 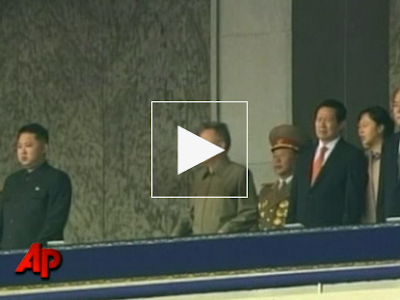 If were an armchair psychologist instead of an armchair sociologist, I'd say this looks like some serious daddy issues going on. No closeness, no interpersonal interaction, no smiling, nothing.

At any rate, not only does this "together shot" not negate what I said above, it may actual bolster it. Looking at the two pictures and imaging the whole scene, does this make you imagine a done-deal dynastic transition? Hardly.

Again, just look at this picture and then remember again how the Western media is repeating the same line over and over again, about how the Kim Jong-un rise to power is all but a done deal, and they use scenes like this, emphasizing that "Kim Jong-un is seen with Kim Jong-il" and declaring it his unveiling to the North Korean people. And then ask yourself: Is this really credible?

As Barbara Demick of the Los Angeles Times put it: at this point, he's not the successor; he's daddy's favorite.