Emigration from South Korea drops below 1000 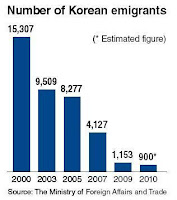 I guess when population growth drops to barely one kid per couple, it's a good thing for there to be fewer and fewer out-going emigrants.

From the Korea Herald:


On the back of the lingering global economic downturn and comparatively brighter circumstances at home, no more than 900 South Koreans are anticipated to move out of the country by the end of this year, falling below the 1,000-mark for the first time in a decade, the Foreign Ministry said.

According to the figures released for the annual parliamentary audit and inspection, a total of 694 South Koreans have moved abroad as of September, with an average of 77 people registering overseas per month.

I'm not sure how the audit arrived at what constitutes an emigrant, but I would submit that many ROK nationals are essentially part-time or temporary emigrants. That is, they go abroad for long periods of time to live, study, work, and even start families, with fuzzily indefinite return dates. Non-returners may not end up in those government stats. For example, South Korean citizens make up an enormous portion of foreign students in the US and Canada; how many of them never end up returning to South Korea to take up residence again?

Still, if the criteria to be considered an emigrant has remained constant over the past decade or so, it is telling that there were over fifteen thousand fitting that definition in 2000 but fewer than one thousand this year. A regularly improving standard of living may be a huge factor, but also at play, I believe, is a harsher impression about what's out there in places like the United States: higher crime, considerably less job opportunity, lack of social support services like guaranteed health insurance, loss of social capital, etc.

Meanwhile, the one thing that many South Koreans most wish to take advantage of in the US — a more open educational experience at the primary and secondary level and a better quality educational experience at some of the universities — can still be had without officially emigrating. Think of the kirŏgi families (wild goose families) where the wife goes abroad with the kids, or the college-age son or daughter who decides that, say, the University of California is a better fit than a second- or third-tier college in Korea.

Come to think of it, though, maybe we should reconsider the kirŏgi family concept.

Finally, while the reduction of emigrants may seem good for efforts to recover the birth rate, if a lower number of permanent emigrants is compensated by an increase in part-time or temporary emigrants, it may be a wash for the birth rate. Those who go abroad to study may end up delaying marriage and/or reducing the overall number of kids they have upon their return, making their numbers no better than if they had left.

We should also note that there are returning emigrants that officially number in the thousands — more than the number leaving. The Korea Times article on this same news item puts the number of returning ROK nationals at 4301 last year and 3205 as of the end of September this year. How many of these are bringing back future workers and how many of them are simply going to be cashing pension checks?

In other words, it's still a demographer's and economist's nightmare.