After a nearly 48-hour blackout thanks to my weekly real-world hump of work every Thursday, I was all set to do a bunch of posts on stuff happening in North Korea this week, and then I thought, ah, I'll just point everybody to this post full of links at One Free Korea.

Although I have not yet read her book Nothing to Envy, I'm happy to hear that Barbara Demick is now a finalist for the National Book Award (that's one of the OFK links from above).

On a side note (and this has nothing at all to do with Barbara Demick per se, but it was triggered by the National Book Foundation choosing a book like hers as a finalist), one thing that I've noted lately is that North Korea serves as a convenient whipping boy for the mainstream media that wants to dispel accusations that they are too "liberal." Though there are some news media outlets that have their reporters hop a plane to Pyongyang and then talk about how things in the capital aren't as bad as we've heard, most journalists fall over themselves finding new ways to discuss how strange, scary, oppressive, eerie, or Orwellian the place is. That is, they're clearly bashing a communist government, which gives them or their media outlet cover to say they are not knee-jerk pro-leftist or anti-capitalist or whatever.

Just an observation. We could get in a whole discussion about whether or not the lame-stream MSM (mainstream media, as some conservatives like to call it so they can identify each other in an online crowd) really is liberal, but it's not hard to find a pattern where the media as a whole (or as individuals) show off that they can be tough on a supposedly liberal subject (e.g., Bill Clinton during the impeachment, Obama as out of touch, the NYT in the run-up to the Gulf War, etc.) to prove they're not really liberal mouthpieces.

This kind of thing (i.e., bashing an okay-to-bash group in order to prove you're not a rabid leftist), of course, may have backfired for NPR's Juan Williams, who may have subconsciously employed this tactic on the Bill O'Reilly Show when he honestly said he thinks what many Americans themselves think:


When I get on the plane, I got to tell you, if I see people who are in Muslim garb and I think, you know, they are identifying themselves first and foremost as Muslims, I get worried. I get nervous.

Juan Williams, a prominent journalist on a network widely reviled by conservatives as the worst of liberal propaganda machines because it's taxpayer-supported, went on a show on the mouthpiece of American conservatives and basically recounted that, "Hey, I'm just like you guys." 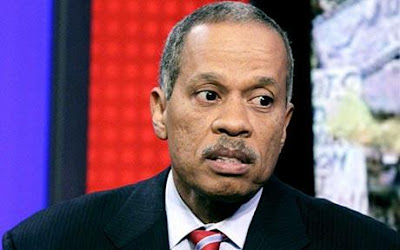 And then he was fired. Because NPR isn't scared of being labeled liberal. They're scared of looking insensitive to minorities, especially a religious minority whom much of the country has tacitly given a green light to bashing.

As we like to say here at Monster Island, this is all kinds of stupid. I have not yet watched Juan Williams on the Bill O'Reilly Show (and I'd like to point out that Bill O'Reilly is my favorite among the Faux News talking heads, though lately I'm more likely to see him on The Daily Show than on his own program), but he should realize there would be a backlash for saying, essentially, that looking at any Muslim makes me fear they are a terrorist.

But NPR, instead of taking such rash action, could have used this star journalist of theirs and forged a national teaching moment out of it. Yeah, even this progressive (?) reporter on this supposedly leftist network himself gets sucked into this toxic prejudice about people who are different from him. One could imagine a whole dialogue where the fears of the non-Muslim population are aired and analyzed for what it is, while also addressing, say, what sometimes seem to be the lack of outrage by the Muslim community in America about terrorist activities perpetrated in the name of their faith and by members of their community (even if it is a small handful out of millions and millions of people).

So the opportunity for a great national dialogue was lost. Some have noted that the sacking of Juan Williams has echoes of this summer's firing of Shirley Sherrod. If so, if NPR reviews the tape and realizes that in the bigger picture of Mr Williams's appearance on Bill O'Reilly's program what he said was more tempered, even, and honest, maybe they can hire the guy back and then then begin that dialogue. (I especially don't like the idea of people being fired for honestly revealing their prejudices, though I can understand NPR's point of view that, well, maybe someone who harbors such thoughts — and publicly airs them — isn't really the kind of reporter that belongs in their stable.)