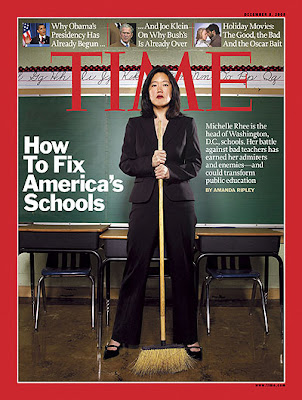 Korean-American educator and chancellor of Washington DC schools Michelle Rhee has penned a valedictory letter in the Washington Post, along with the soon-to-be exiting mayor Adrian Fenty who brought her in to fix DC schools:


When the two of us began this journey together, we made a pact with each other. We pledged that we would always put children first and make decisions that would be in their best interest, even when -- especially when -- we knew it would cause consternation among adults. This pact was our true north. In many ways, it cut through the hard choices to something clear and simple: We would fight for the right of every parent to promise and give their children an excellent education. We would insist on a school system that backed up that promise. We would ensure that children received the skills and knowledge they needed to do anything they wanted in life. ...

We've made tremendous strides. On the nation's gold standard, the National Assessment of Educational Progress, we've gone from being the worst-performing school district in the country to a force of 46,000 children who lead the nation in gains -- with some of the greatest advances coming from our students of color, students receiving special-education services and students formally learning the English language for the first time.

On our local exam, we've increased student achievement in all subject areas and grade levels. At the secondary levels, these gains are unparalleled anywhere in the country. More students are graduating and ready to attend college, our schools are safer and our parents are more satisfied. A greater percentage of the system's taxpayer dollars are going directly to the classroom, where they belong, instead of supporting a bloated and formerly inefficient central office. The operational issues that long plagued our schools (undelivered books, late paychecks and shoddy facilities) are quickly becoming complaints of the past.

We absolutely believe the progress can continue. Our presumptive new mayor is a native Washingtonian who cares deeply about education. We leave behind arguably the most talented and driven team that a school district administration could have. They are in the schools; they are in the central office; they are in other District agencies partnering with DCPS to modernize schools and update and support technologies. All of these people and more are getting up every morning and doing the incredibly difficult work that the cameras don't see. As leaders, we simply "blocked and tackled" so that they could get things done.

I know she didn't invent it, but I just want to point out that I like the phrase (and the concept) of having one's true north.

Anyway, I do realize that Ms Rhee has her critics, but if nothing else, I do think her situation underscores how real and meaningful change rarely comes easily or automatically, just because we elect people who say they will do things differently. Whether it's teachers' unions, corporate interests, anti-government ideologues touting free-market solutions for everything, it's easy for groups to get caught up in the politics and thus fail to effect necessary improvements, and indeed, those who make the hard choices often set themselves up for ballot box defeat (and this applies to Obamacare as much as anything).

And that's my sappy, anodyne comment of the day.