I was only a kid during the Cold War, but I delivered newspapers, and it seemed hotter than that euphemistic moniker suggested. So when today we have China rising up to take on the role of Soviet Union (and Russia flailing and failing as it tries to recapture the same), it's not hard to see that a new cold war pitting Beijing and Washington against each other is upon us.

Sounds paranoid? Yeah, suggesting that a major trading partner is quickly becoming a dangerous nuisance and a threat to democratic allies is a good way to make yourself sound like a crank, but from Beijing's aggressive catch-and-release program concerning North Korean refugees, to its heavy-handed attempt to suppress free speech in Seoul and its attack on Japanese interests (and hostage-taking of Japanese citizens in China) over the recent Senkaku/Diaoyu dispute, there's no mistaking the rise of an increasingly economically powerful China determined to replace the US in a Sino-centric hegemony that exists only to gratify China's nationalistic (and at times fantastic) narrative as the center of Asia.

And with that long intro, I'd like to point out a piece in todays New York Times, about the growing distrust of and animosity toward the US in the Chinese military:


The Pentagon is worried that its increasingly tense relationship with the Chinese military owes itself in part to the rising leaders of Commander Cao’s generation, who, much more than the country’s military elders, view the United States as the enemy. Older Chinese officers remember a time, before the Tiananmen Square protests in 1989 set relations back, when American and Chinese forces made common cause against the Soviet Union.

The younger officers have known only an anti-American ideology, which casts the United States as bent on thwarting China’s rise.

“All militaries need a straw man, a perceived enemy, for solidarity,” said Huang Jing, a scholar of China’s military and leadership at the National University of Singapore. “And as a young officer or soldier, you always take the strongest of straw men to maximize the effect. Chinese military men, from the soldiers and platoon captains all the way up to the army commanders, were always taught that America would be their enemy.”

With rising economic affluence, we were told in the 1990s, China's middle class would not only rein in any excesses by the Chinese authorities, they would actually effect democratic change in the PRC, eventually. But what we see is Beijing deftly using the Internet to whip up nationalistic sentiment against its neighbors (e.g., South Korea, Japan, occasionally Taiwan) and the US, in a way meant to distract the citizenry from its abuses at home.

And it is for this reason that I agree with people like Joshua Stanton (that's a must-read post, by the way) that awarding the Nobel Peace Prize to a Chinese dissident who speaks out against Beijing's anti-democratic ways was a brilliant move. The Chinese government cannot rewrite that part of history, and even if they convince most PRC nationals that Liu Xiaobo is a criminal and even Norway is out to get them, some will check out just what he has to say. And then wonder why Beijing is so against that. 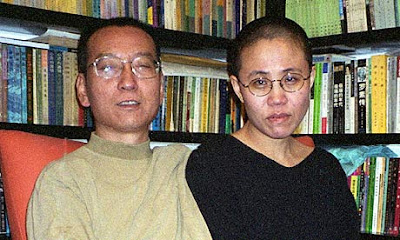 Of course, they won't get any help figuring it out from me. That's because Blogger (which hosts this site) is apparently blocked from view in China, so they can't see me quote things like this from the above NYT link:


Mr. Liu, 54, a veteran pro-democracy advocate, is serving an 11-year sentence for his essays and a manifesto he helped draft, Charter ’08, that demands political reform, human rights guarantees and an independent judicial system.

Although initially signed electronically by thousands of intellectuals, students and former Communist Party officials, Charter ’08 has since been blocked on the Internet and is largely unknown to most Chinese.

It will be interesting to see if Mr Liu is released and allowed to go pick up his Nobel in person, or if he's allowed back into China after that. Maybe they'll release his wife Liu Xia from house arrest and let her go in his stead. Whatever happens, I'm expecting some ham-handedness by Beijing, and when it comes to mucking up attempts to show the world they're not a bunch of thugs, they rarely disappoint.