As if this is a surprise:


Chinese President Hu Jintao on Saturday pledged to strengthen ties with the new leadership in North Korea, during a visit to Beijing by a senior delegation from Pyongyang, state media reported. 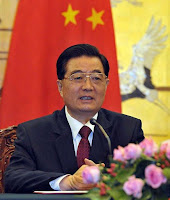 Hu's comments come after ailing North Korean leader Kim Jong-Il this week offered senior posts in the Workers' Party of Korea (WPK) to his son Jong-Un and promoted him to the rank of general -- signs that he is the heir apparent.

"We believe that the WPK, the DPRK government and people will see new achievements in their national construction under the new WPK leadership," Hu said, according to China's official Xinhua news agency.

WPK representatives headed for Beijing about as soon as their historic conference was over. It lends credibility to my theory that North Korea will soon attempt Chinese-style reforms, perhaps at the behest of Beijing which may have insisted on this in exchange for their acquiescence to another dynastic power transition in Pyongyang.

I do wish to take issue with the AFP's description of what happened in Pyongyang as "the new leadership in North Korea." It is anything but. It is the old leadership (Kim Jong-il was re-elected by the rubber-stamp WPK), and his son Kim Jong-un eventually filling his shoes is anything but a done deal. Moreover, at this point, he is certainly not actually running anything.